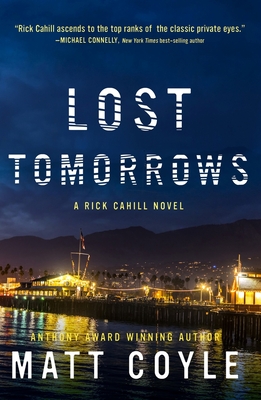 This is book number 6 in the The Rick Cahill Series series.

Winner of the Shamus Award and Lefty Award

Would you risk your own soul to avenge the death of a loved one?

A phone call thrusts Rick Cahill’s past and all its tragic consequences into his present. Krista Landingham, his former partner on the Santa Barbara Police Department, is dead. When Rick goes to the funeral in the city where his wife was murdered and where he is seen as guilty for her death in the eyes of the police, he discovers that Krista’s death may not have been a tragic accident, but murder.

Hired by Krista’s sister, Leah, to investigate, Rick follows clues that lead him to the truth, not only about Krista’s death, but about the tragedy that ruined his life. Along the way, Leah shows him that his life can be salvaged, and he can feel love again if he can just move beyond his past. But the past is Rick’s present and will always be until he rights his one great wrong.

In the end, Rick is left with a decision that forces him to confront the horrific actions he’ll need to take to exact revenge and achieve redemption.

While all of the novels in the Rick Cahill PI Crime Series stand on their own and can be read in any order, the publication sequence is:

Yesterday’s Echo
Night Tremors
Dark Fissures
Blood Truth
Wrong Light
Lost Tomorrows
Blind Vigil
Last Redemption
Doomed Legacy
Matt Coyle is the author of the Rick Cahill PI Crime Series. Lost Tomorrows is the sixth in this best-selling series and winner of the Shamus and Lefty Awards. Yesterday’s Echo, the first in the series, won the Anthony Award, and his other novels have been nominated for numerous Macavity, Shamus, and Lefty Awards. Matt is a graduate of UC Santa Barbara and lives in San Diego with his yellow Lab, Angus.
“Sharp, suspenseful, and poignant, Lost Tomorrows hits like a breaking wave and pulls readers into its relentless undertow. Matt Coyle is at the top of his game.” —Meg Gardiner, Edgar Award-winning author

“Southern California has turned out its fair share of thriller and noir superstars—some of them transplants, of course, before making their names on the west coast—such as Michael Connelly, Robert Crais, T. Jefferson Parker, James Ellroy, Raymond Chandler, and Ross MacDonald. Matt Coyle is quickly writing himself onto that list.” —New York Journal of Books

“Coyle’s sixth ‘Rick Cahill’ novel will please noir enthusiasts with its staccato prose, evocative descriptions, and hard-nosed protagonist. Readers new to the series can still enjoy this book as a compelling stand-alone mystery, and enticingly vague references to previous books make a strong case for checking out Rick’s past adventures.” —Library Journal

“Readers seeking a thriller that borders on a study of psychology will find a treasure trove in this novel set in Santa Barbara, the city of lost tomorrows.”—Bookreporter

Praise for the Rick Cahill Series

“Matt Coyle's protagonist, Rick Cahill, is haunted both by the sins of his father and by his own mistakes—but he's driven to find the truth, no matter where it takes him, and that's what makes this story so compelling.” —Steve Hamilton, New York Times best-selling author​