The Jewish Gospels: The Story of the Jewish Christ (Paperback) 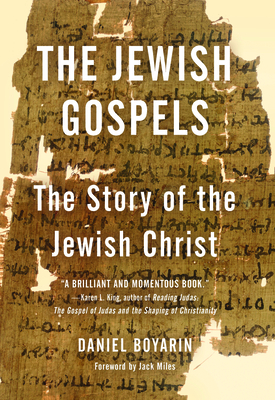 The Jewish Gospels: The Story of the Jewish Christ (Paperback)


Usually Arrives to Store in 1-5 Days
In July 2008 a front-page story in the New York Times reported on the discovery of an ancient Hebrew tablet, dating from before the birth of Jesus, which predicted a Messiah who would rise from the dead after three days. Commenting on this startling discovery at the time, noted Talmud scholar Daniel Boyarin argued that "some Christians will find it shocking--a challenge to the uniqueness of their theology." In this powerful, groundbreaking work, Boyarin guides us through a rich tapestry of new discoveries and ancient scriptures to make the powerful case that our conventional understandings of Jesus and of the origins of Christianity are wrong. Boyarin's scrupulously illustrated account argues that the coming of the Messiah was fully imagined in the ancient Jewish texts. Jesus, moreover, was embraced by many Jews as this person, and his core teachings were not at all a break from Jewish beliefs and teachings. Jesus and his followers, Boyarin shows, were simply Jewish. What came to be known as Christianity came much later, as religious and political leaders sought to impose a new religious orthodoxy that was not present at the time of Jesus's life. Published in hardcover to nationwide attention and now available for the first time in paperback, this brilliant work will continue to challenge some of our most cherished assumptions.

Daniel Boyarin, Taubman Professor of Talmudic Culture and rhetoric at the University of California, Berkeley, is the recipient of numerous awards and fellowships. His books include "A Radical Jew," "Border Lines," and "Socrates and the Fat Rabbis." He lives in Berkeley, California.

"Raises profound questions . . . this provocative book will change the way we think of the Gospels in their Jewish context."
—John J. Collins, Yale Divinity School

"[A] fascinating recasting of the story of Jesus."
—Elliot Wolfson, New York University