Sacred Symbols of the Dogon: The Key to Advanced Science in the Ancient Egyptian Hieroglyphs (Paperback) 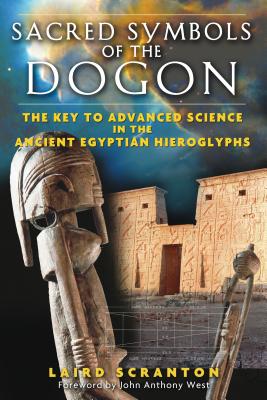 Sacred Symbols of the Dogon: The Key to Advanced Science in the Ancient Egyptian Hieroglyphs (Paperback)

In The Science of the Dogon, Laird Scranton demonstrated that the cosmological structure described in the myths and drawings of the Dogon runs parallel to modern science--atomic theory, quantum theory, and string theory--their drawings often taking the same form as accurate scientific diagrams that relate to the formation of matter. Scranton also pointed to the close resemblance between the keywords and component elements of Dogon cosmology and those of ancient Egypt, and the implication that ancient cosmology may also be about actual science.

Sacred Symbols of the Dogon uses these parallels as the starting point for a new interpretation of the Egyptian hieroglyphic language. By substituting Dogon cosmological drawings for equivalent glyph-shapes in Egyptian words, a new way of reading and interpreting the Egyptian hieroglyphs emerges. Scranton shows how each hieroglyph constitutes an entire concept, and that their meanings are scientific in nature. Using the Dogon symbols as a “Rosetta stone,” he reveals references within the ancient Egyptian language that define the full range of scientific components of matter: from massless waves to the completed atom, even suggesting direct correlations to a fully realized unified field theory.
Laird Scranton is an independent software designer who became interested in Dogon mythology and symbolism in the early 1990s. He has studied ancient myth, language, and cosmology since 1997 and has been a lecturer at Colgate University. He also appears in John Anthony West’s Magical Egypt DVD series. He lives in Albany, New York.
“Sacred Symbols of the Dogon will challenge the reader to seriously consider that ancient civilizations possessed a scientific sophistication rivaling our present-day theories of matter and the fundamental forces of physics. Highly recommended for anyone who has questioned the mainstream view of ancient civilization as scientifically primitive.”
— John Dering, chief scientist for lasers and special projects at Scientific Applications & Research A

"Scranton relates complex and difficult topics in a simple and straightforward manner that, while requiring attention to detail, leads to significant and rewarding realizations."
— David Paulsen, New Age Retailer, Mar/Apr 2008

". . . an important tome in a larger body of work which points towards a 'lost chapter' in human history, pre-dating the last ice age."
— Neil Hudson, Yorkshire Post, Apr 2008

"An exciting thesis to make us all think."
— Nexus New Times Magazine

" . . . here the Dogon symbols are revealed in a discussion of ancient Egyptian languages and scientific parallels sure to interest any New Age collection interested in scientific foundations of early Egyptian history."
— The Midwest Book Review, Jan 2008

“From consideration of the scientific components of matter, the massless waves through to the nature and form of the atom the author weaves an eye-opening and challenging vista upon ancient and supposedly primitive, cultures whose true nature and form we have yet to fully comprehend.”
— Mysteries of Sirius, October 2013