The Art of Happiness, 10th Anniversary Edition: A Handbook for Living (Hardcover) 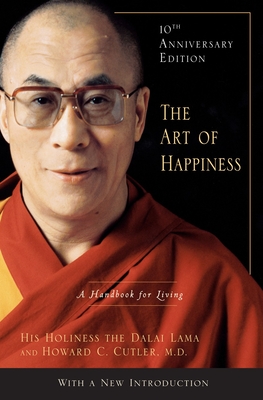 The Art of Happiness, 10th Anniversary Edition: A Handbook for Living (Hardcover)


Usually Arrives to Store in 1-5 Days
A beloved classic—the original book on happiness, with new material from His Holiness the Dalai Lama

Nearly every time you see him, he's laughing, or at least smiling. And he makes everyone else around him feel like smiling. He's the Dalai Lama, the spiritual and temporal leader of Tibet, a Nobel Prize winner, and a hugely sought-after speaker and statesman. Why is he so popular? Even after spending only a few minutes in his presence you can't help feeling happier.

If you ask him if he's happy, even though he's suffered the loss of his country, the Dalai Lama will give you an unconditional yes. What's more, he'll tell you that happiness is the purpose of life, and that the very motion of our life is toward happiness. How to get there has always been the question. He's tried to answer it before, but he's never had the help of a psychiatrist to get the message across in a context we can easily understand. The Art of Happiness is the book that started the genre of happiness books, and it remains the cornerstone of the field of positive psychology.

Through conversations, stories, and meditations, the Dalai Lama shows us how to defeat day-to-day anxiety, insecurity, anger, and discouragement. Considerd by many to the classic book by the Dalai Lama, he explores many facets of everyday life, including relationships, loss, and the pursuit of wealth, to illustrate how to ride through life's obstacles on a deep and abiding source of inner peace. Based on 2,500 years of Buddhist meditations mixed with a healthy dose of common sense, The Art of Happiness is a book that crosses the boundaries of traditions to help readers with difficulties common to all human beings. After being in print for ten years, this book has touched countless lives and uplifted spirits around the world.
Tenzin Gyatso, His Holiness the Fourteenth Dalai Lama, is the spiritual and temporal leader of the Tibetan people. His tireless efforts on behalf of human rights and world peace have brought him international recognition. He is a recipient of the Wallenberg Award (conferred by the U.S. Congressional Human Rights Foundation), the Albert Schweitzer Award, and the U.S. Congressional Gold Medal, and the Nobel Peace Prize.

Howard C. Cutler, M.D., is a psychiatrist, best-selling author, and speaker. A leading expert on the science of human happiness, Dr. Cutler is coauthor, with His Holiness the Dalai Lama, of the acclaimed Art of Happiness series of books, international bestsellers that have been translated into fifty languages. The groundbreaking first volume, The Art of Happiness: A Handbook for Living, appeared on the New York Times bestseller list for ninety-seven weeks. Dr. Cutler lives in Phoenix.