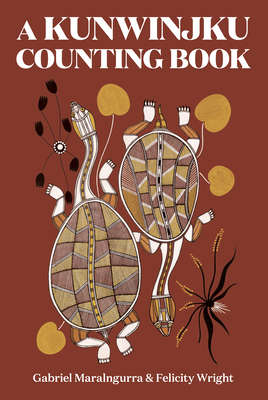 
Usually Arrives to Store in 1-5 Days
One crocodile with many sharp teeth, two snake-necked turtles swimming in a billabong, three water goannas soaking up the sun... Learn to count with the animals of Australia's West Arnhem Land and the traditional art of indigenous Kunwinjku culture.

One, two, three. Nakudji, bokenh, danjbik. Accompanied by illustrations drawing on traditional Kunwinjku art, each of the twelve entries of this counting book showcases a different animal of West Arnhem Land, Australia. From crocodiles and echidnas to wallabies, children and adults alike will enjoy learning the Kunwinjku names for numbers and animals, as well as discovering more about these animals' habitat and behavior, and what they mean to the indigenous Bininj.

Whether teaching you how dragonflies indicate the passing of the seasons or how to catch and cook barramundi, the fascinating Kunwinjku Counting Book offers insight into the complex ecology of West Arnhem Land and the vibrant traditions of Bininj culture. More than just a counting book, this is also a beautifully illustrated work of art, a tribute to the indigenous people of Australia, and a fascinating nature guide to Northern Territory ecology.

Gabriel Maralngurra was born in 1968 in Oenpelli, Australia. He belongs to the Ngalngbali clan and lives in Kudjekbinj on the West Arnhem Land in the Northern Territory. He likes to paint billabong scenes with freshwater animals and likes the djang (creation stories) of his country. He is an ambassador and intercultural mediator for Kunwinjku culture, having worked many years as a fabric screenprinter and designer, a tour guide, Kunwinjku-English translator, Injalak Arts board member and chairperson, and now Co-Manager of Injalak Arts. "I really wanted to do this book to make children happy. I made it so they can learn about the animals--how they live and what they eat and how we catch them. Also how they tell us about the seasons here. I want to share my culture in Kunwinjku and English and help children learn how to count."