The Tao of Physics: An Exploration of the Parallels between Modern Physics and Eastern Mysticism (Paperback) 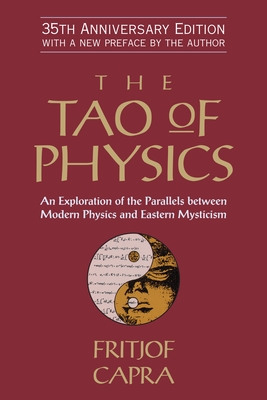 The Tao of Physics: An Exploration of the Parallels between Modern Physics and Eastern Mysticism (Paperback)

The Tao of Physics brought the mystical implications of subatomic physics to popular consciousness for the very first time. Many books have been written in the ensuing years about the connections between quantum theory and the ideas of Buddhism, Hinduism, and Taoism, but Fritjof Capra’s text serves as the foundation on which the others have been built—and its wisdom has stood the test of time. Its publication in more than twenty-three languages stands as testimony to its universal applicability and its enduring significance.

This special edition celebrates the thirty-fifth anniversary of this early Shambhala best seller that has gone on to become a true classic. It includes a fresh cover design and a new preface by the author reflecting on further discoveries and developments in the years since the book’s original publication.

“Physicists do not need mysticism,” Dr. Capra says, “and mystics do not need physics, but humanity needs both.” It is a message of timeless importance.
Fritjof Capra has done research in theoretical high-energy physics at the University of Paris; the University of California; Stanford University; and Imperial College, London. He holds a PhD from the University of Vienna. Dr. Capra is the author of five international best sellers: The Tao of Physics (1975), The Turning Point (1982), Uncommon Wisdom (1988), The Web of Life (1996), and The Hidden Connections (2002).
“A brilliant best seller. . . . Lucidly analyzes the tenets of Hinduism, Buddhism, and Taoism to show their striking parallels with the latest discovery in cyclotrons.”—New York magazine

“A pioneering book of real value and wide appeal.”—Washington Post


“I have been reading the book with amazement and the greatest interest, recommending it to everyone I meet and, as often as possible, in my lectures. I think you have done a magnificent and extremely important job.”—Joseph Campbell