No Death, No Fear: Comforting Wisdom for Life (Paperback) 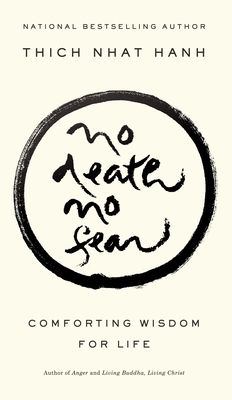 No Death, No Fear: Comforting Wisdom for Life (Paperback)


Usually Arrives to Store in 1-5 Days
"[Thich Nhat Hanh] shows us the connection between personal, inner peace and peace on earth." --His Holiness The Dalai Lama

Nominated by Martin Luther King, Jr. for a Nobel Peace Prize, Thich Nhat Hanh is one of today’s leading sources of wisdom, peace, compassion and comfort.

With hard-won wisdom and refreshing insight, Thich Nhat Hanh confronts a subject that has been contemplated by Buddhist monks and nuns for twenty-five-hundred years— and a question that has been pondered by almost anyone who has ever lived: What is death?

In No Death, No Fear, the acclaimed teacher and poet examines our concepts of death, fear, and the very nature of existence. Through Zen parables, guided meditations, and personal stories, he explodes traditional myths of how we live and die. Thich Nhat Hanh shows us a way to live a life unfettered by fear.
Thich Nhat Hanh is a Vietnamese monk, a rare combination of mystic, scholar, and activist and one of the most beloved Buddhist teachers in the West. Poet, Zen master, and chairman of the Vietnamese Buddhist Peace Delegation during the Vietnam War, he was nominated by Dr. Martin Luther King, Jr., for the Nobel Peace Prize.
"Thich Nhat Hanh is a holy man, for he is humble and devout. He is a scholar of immense intellectual capacity. His ideas for peace if applied, would build a monument of ecumenism, to world brotherhood, to humanity." —Martin Luther King, Jr.

"He shows us the connection between personal, inner peace, and peace on earth."—His Holiness The Dalai Lama

"[A] masterwork... Thich Nhat Hanh has rendered us an invaluable service by opening our hearts and minds." —Spirituality & Health Journal

"At some point in their lives, most people are haunted by the question 'What happens after death?' Beloved teacher, poet, and activist Thich Nhat Hanh takes this question to heart in his latest book about how to understand death and stop fearing life...His advice is founded on personal examples, and guided meditations help readers grapple with the loss of a loved one, confront their mortality, and live each day to its fullest." —Tricycle