An Introduction to Buddhism (Core Teachings of Dalai Lama #1) (Paperback) 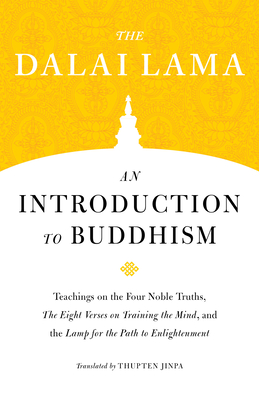 An Introduction to Buddhism (Core Teachings of Dalai Lama #1) (Paperback)

By The Dalai Lama

This is book number 1 in the Core Teachings of Dalai Lama series.

There is no one more suited to introduce beginners—and remind seasoned practitioners—of the fundamentals of Tibetan Buddhism than His Holiness the Dalai Lama. Speaking to an audience of Western students, the Dalai Lama shows us how to apply basic Buddhist principles to our day-to-day lives. Starting with the very foundation of Buddhism, the Four Noble Truths, he provides the framework for understanding the Buddha’s first teachings on suffering, happiness, and peace. He follows with commentary on two of Buddhism’s most profound texts: The Eight Verses on Training the Mind and Atisha’s Lamp for the Path to Enlightenment, often referring to the former as one of his main sources of inspiration for the practice of compassion.

With clear, accessible language and the familiar sense of humor that infuses nearly all of his work, the Dalai Lama invites us all to develop innermost awareness, a proper understanding of the nature of reality, and heartfelt compassion for all beings.

This book was previously published under the title Lighting the Way.
HIS HOLINESS THE FOURTEENTH DALAI LAMA is considered the foremost Buddhist leader of our time. The exiled head of the Tibetan people, he is a Nobel Peace Laureate, a Congressional Gold Medal recipient, and a remarkable teacher and scholar who has authored over one hundred books.

With Desmond Tutu, he co-authored The Book of Joy, which has spent several weeks on the NYT bestseller list.