Inseparable across Lifetimes: The Lives and Love Letters of the Tibetan Visionaries Namtrul Rinpoche and Khandro Tare Lhamo (Paperback) 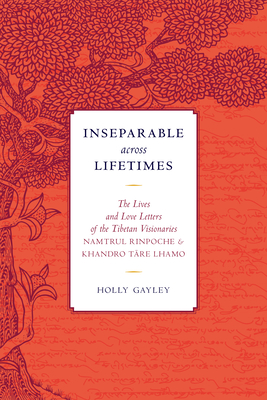 Inseparable across Lifetimes: The Lives and Love Letters of the Tibetan Visionaries Namtrul Rinpoche and Khandro Tare Lhamo (Paperback)

A true story of love, separation, and rediscovery in a time of cultural and spiritual upheaval in Tibet.

An inspiring and intimate tale set against the turmoil of recent Tibetan history, Inseparable across Lifetimes offers for the first time the translations of love letters between two modern Buddhist visionaries. The letters are poetic, affectionate, and prophetic, articulating a hopeful vision of renewal that drew on their past lives together and led to their twenty-year partnership. This couple played a significant role in restoring Buddhism in the region of Golok once China’s revolutionary fervor gave way to reform. Holly Gayley, who was given their correspondence by Namtrul Rinpoche himself, has translated their lives and letters in order to share their remarkable story with the world.
Holly Gayley is Associate Professor in the Department of Religious Studies at the University of Colorado Boulder. Her research focuses on contemporary Buddhist literature in Tibet, and her publications address Buddhist ethics, gender and sexuality, and religious modernism.
“An instant classic, Gayley’s translations of contemporary love letters between a Tibetan visionary couple are luminous. The couple’s spiritual courtship animates a relationship that bridges the traditional and modern, transcendent and mundane. This is an inspiring page-turner that shows mutually transformative love is really possible.”—Judith Simmer-Brown, author of Dakini’s Warm Breath: The Feminine Principle in Tibetan Buddhism

“Inseparable across Lifetimes tells the amazing personal stories of two Buddhist masters in twentieth-century Tibet, and their love letters are skillfully translated here into soaring yet intimate English. Few publications record this crucial time period after the cultural devastation of Tibet, and fewer still offer such visionary hope for some kind of transformation.”—Sarah Harding, author of Niguma, Lady of Illusion

“In a love relationship that was not just based on ordinary passions, but rather the union of incisive knowledge and skillful means, Namtrul Rinpoche and Khandro Tāre Lhamo came to know the pure essence of wisdom exaltation as the sacred union of male and female. They used this unobstructed power to work for the welfare of others through their enlightened deeds. I am grateful to Holly Gayley for bringing their exemplary life stories and songs of profound union into the English language so that readers can glimpse the best of our Tibetan Vajrayana tradition.”—Lama Chonam, teacher and translator, Light of Berotsana Translation Group

“There is a decided feeling of closeness, care, and devotion in this wondrous tale—a taste of bliss.”—Buddhadharma: The Practitioner's Quarterly