We Are Not Yet Equal: Understanding Our Racial Divide (Paperback) 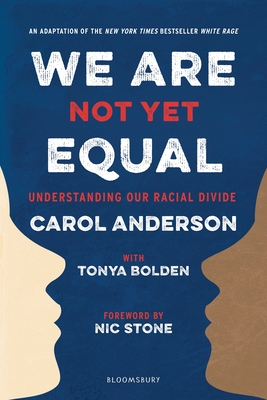 We Are Not Yet Equal: Understanding Our Racial Divide (Paperback)

History texts often teach that the United States has made a straight line of progress toward Black equality. The reality is more complex: milestones like the end of slavery, school integration, and equal voting rights have all been met with racist legal and political maneuverings meant to limit that progress. We Are Not Yet Equal examines five of these moments: The end of the Civil War and Reconstruction was greeted with Jim Crow laws; the promise of new opportunities in the North during the Great Migration was limited when blacks were physically blocked from moving away from the South; the Supreme Court’s landmark 1954 Brown v. Board of Education decision was met with the shutting down of public schools throughout the South; the Civil Rights Act of 1964 and Voting Rights Act of 1965 led to laws that disenfranchised millions of African American voters and a War on Drugs that disproportionally targeted blacks; and the election of President Obama led to an outburst of violence including the death of Black teen Michael Brown in Ferguson, Missouri as well as the election of Donald Trump.

Including photographs and archival imagery and extra context, backmatter, and resources specifically for teens, this book provides essential history to help work for an equal future.

Carol Anderson is the Charles Howard Candler Professor and Chair of African American Studies at Emory University. She is the author of One Person, No Vote, longlisted for the National Book Award and a finalist for the PEN/John Kenneth Galbraith Award; White Rage, a New York Times bestseller and winner of the National Book Critics Circle Award; Bourgeois Radicals; and Eyes off the Prize. She was named a Guggenheim Fellow for Constitutional Studies and is a member of the American Academy of Arts and Sciences. She lives in Atlanta, Georgia.

“. . . [D]ocuments centuries of techniques designed to limit progress in the black community. Although some of the material may be upsetting, this is a book that should absolutely be included in the curriculum.” —Starred review, School Library Connection

“. . . [A] well-articulated and neatly contextualized examination of the roots of American racism . . .” —VOYA

“A sobering primer on the myriad ways African American resilience and triumph over enslavement, Jim Crow and intolerance have been relentlessly defied by the very institutions entrusted to uphold our democracy.” —Washington Post

“[White Rage] is an extraordinarily timely and urgent call to confront the legacy of structural racism bequeathed by white anger and resentment, and to show its continuing threat to the promise of American democracy.” —Editor's Choice, New York Times Book Review

“White Rage is a riveting and disturbing history that begins with Reconstruction and lays bare the efforts of whites in the South and North alike to prevent emancipated black people from achieving economic independence, civil and political rights, personal safety, and economic opportunity.” —The Nation

“An unflinching look at America's long history of structural and institutionalized racism, White Rage is a timely and necessary examination of white anger and aggression towards black America . . . A compelling look at American history, White Rage has never seemed more relevant than it does today.” —Bustle, “17 Books On Race Every White Person Needs To Read”

“White Rage belongs in a place of honor on the shelf next to other seminal books about the African-American experience such as James Baldwin's The Fire Next Time, Isabel Wilkerson's The Warmth of Other Suns, and Michelle Alexander's The New Jim Crow.” —Santa Barbara Independent

“[A] powerful survey of American history as seen in the violent white reactions to black progress, from Reconstruction to the great migration to the current political landscape.” —Boston Globe

“Anderson has shown, with her well-sourced (she has several hundred detailed footnotes) and readable book, why the fights over race and access to the perquisites of American citizenship grind on . . . White Rage lends perspective and insight for those of us who are willing to confront, study and learn from the present situation in this country.” —St. Louis Dispatch