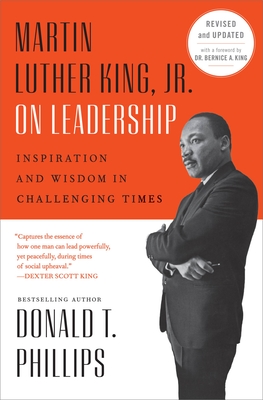 By Donald T. Phillips, Dr. Bernice A. King (Foreword by)


On Our Shelves Now
Read the detailed and absorbing chronicle of Martin Luther King's leadership during the most tumultuous period in America's recent past—featuring a foreword by Dr. Bernice King.

Hailed as America’s greatest civil rights advocate, Martin Luther King, Jr., inspired the people of the United States to demand equality, regardless of the color of their skin. And he did it peacefully.

Time may have passed, but in today’s world, his teachings are needed more than ever. Drawing from the actions of Martin Luther King, Jr.'s life, each section identifies the key leadership skills he displayed, such as: With Martin Luther King, Jr.’s wisdom and unwavering dedication to making the opposition listen, you can become a peaceful leader and advocate for the way the world should look, no matter who stands in your way.
Donald T. Phillips is the bestselling author of eighteen books, including Lincoln on Leadership and On the Wing of Speed. He has also collaborated on books with Mike Krzyzewski (Coach K of Duke University), Phil Mickelson, and Cal Ripken, Jr.