Find Out About Animal Homes (Hardcover) 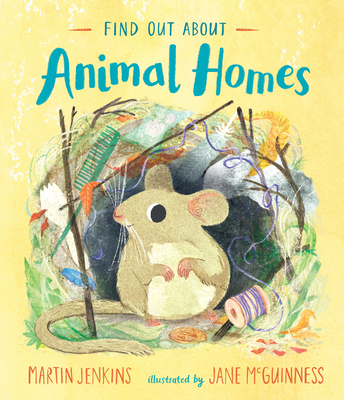 Find Out About Animal Homes (Hardcover)


On Our Shelves Now
Discover some of the many types of animal homes in this engaging introduction for young children from a conservation biologist.

Some animals make houses out of sticks (storks will return to their large twiggy nests year after year). Others build them out of stones (young caddis flies carry their pebbly homes wherever they go). And some—like edible-nest swiftlets—craft houses out of spit! Many animals have homes, but not all animal homes are the same. From honeybees with neat, precise hives to pack rats with messy nests, from prairie dogs whose underground towns last for decades to orangutans who make a new home every day, the range of dwellings depicted here shows how much animals’ behavior can vary, even in their own homes. Melding a simple narration with more detailed facts on such animals as beavers, spiders, polar bears, termites, and reindeer, this appealing picture book also offers a brief note on animals and their homes in the back matter.
Martin Jenkins is a conservation biologist and the award-winning author of many books for children, including The Emperor’s Egg, illustrated by Jane Chapman; A World of Plants, illustrated by James Brown; and Under Threat: An Album of Endangered Animals, illustrated by Tom Frost. Martin Jenkins lives in Cambridge, England.

Jane McGuinness received an MA in children’s book illustration from the Cambridge School of Art in England. She is the author-illustrator of Prickly Hedgehogs!, which was her first picture book. Jane McGuinness lives in England.