The Labyrinth of Doom (Once Upon a Tim #2) (Hardcover) 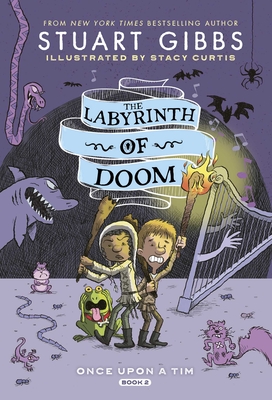 The Labyrinth of Doom (Once Upon a Tim #2) (Hardcover)

This is book number 2 in the Once Upon a Tim series.

Knight-in-training Tim and his best friend, Belinda, embark on a quest to save Princess Grace in this second book in the hilarious, highly illustrated Once Upon a Tim middle grade series from New York Times bestselling author Stuart Gibbs.

Prince Ruprecht is VERY UPSET that knights-in-training, Tim and Belinda, have thwarted his plans and ruined his chances with Princess Grace. And so, to get even, he has kidnapped the princess and trapped her in the most complicated, dangerous, complex, dastardly, biggest (okay you get the point)…and scariest maze in all the world!

Now it’s up to Tim, Belinda, Ferkle, and Rover to fend off menacing beasts (like the minotaur), conquer treacherous obstacles (like chasms filled with cave sharks), find their way through the labyrinth (which is very tricky), and rescue the princess before time runs out. Oh, and also they need to remember how to get back out again…or they’ll be trapped inside the maze forever.
Stuart Gibbs is the New York Times bestselling author of the Charlie Thorne series, FunJungle series, Moon Base Alpha series, Once Upon a Tim series, and Spy School series. He has written screenplays, worked on a whole bunch of animated films, developed TV shows, been a newspaper columnist, and researched capybaras (the world’s largest rodents). Stuart lives with his family in Los Angeles. You can learn more about what he’s up to at StuartGibbs.com.

Stacy Curtis is the illustrator of The 7 Habits of Happy Kids series by Sean Covey and the Once Upon a Tim series by bestselling author Stuart Gibbs. He lives with his wife and dog in Oak Lawn, Illinois.
Throughout Gibbs’ lighthearted, laugh-out-loud tale, Curtis supplies proper notes of farce or stark terror as appropriate in flurries of line drawings...[a]long the way, Tim adds educational value to his narrative by flagging and then pausing to define vocabulary-building words like laborious and vexing. A lighter-than-air blend of knightly exploits and rib-tickling twists.
— Kirkus Reviews