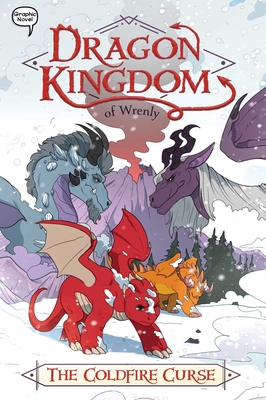 This is book number 1 in the Dragon Kingdom of Wrenly series.

In the first installment of the exciting Dragon Kingdom of Wrenly graphic novel series, the scarlet dragon Ruskin’s bravery is put to the test when a curse threatens his kingdom.

As the pampered pet dragon of the Prince of Wrenly, Ruskin has never known life beyond the walls of the palace. Until the day a young dragon from Crestwood comes to the palace to plead for help. An evil curse has been unleashed in Crestwood and threatens to destroy all of Wrenly. Ruskin has a choice to make: stay safe at home in the palace, or try to help save his kingdom. For Ruskin, there is no choice. He knows he has to try and help if he can.

What Ruskin and his new dragon friends don’t yet realize is that the curse was awoken for one reason only—to put Ruskin in harm’s way. The mission to reverse the curse is far more dangerous than anyone realizes…in fact, it’s seemingly impossible. Why is Ruskin the target of these shadowy forces? And how far is Ruskin willing to go to save his kingdom?
Jordan Quinn grew up in a fairy tale castle in England. It had a spiral stone staircase, a moat, and a dungeon. As a child she liked to play hide-and-go-seek and ride her beloved horse, Prince Charming. When she wasn’t riding, she wrote stories about fairies, trolls, dragons, and wizards. Today, Jordan lives on a ranch in California with her husband, son, and a golden retriever named Sir Toots-a-Lot.