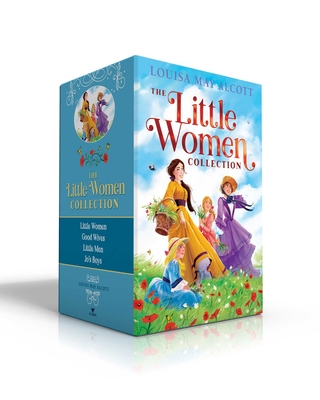 By Louisa May Alcott

Discover the entirety of Louisa May Alcott’s enchanting tale of the March sisters for yourself—now together in one complete, beautifully designed boxed set!

The quintessential American family novel, Little Women captured readers’ hearts right from the start. A bestseller from the time it was originally published in 1868, it tells the story of the beloved March sisters: Meg, Beth, Jo, and Amy. The four girls couldn’t be more different, but with their father fighting in the Civil War and their mother supporting the family, the sisters have to rely on each other as they grow up and grow together. Their story continues in Good Wives as the girls venture out on their own, experiencing love, loss, and the importance of family.

Little Men furthers Jo’s story and introduces new protagonists when Jo opens a school for boys in her late aunt’s estate. As she takes in an orphaned street musician and deals with tireless troublemakers, Jo and her family’s lives are forever changed. The joys, sorrows, and adventures of the boys’ lives continue as we meet them ten years later in Jo’s Boys, the final book of the quartet.

Louisa May Alcott recreates her own family’s dramatic, comic, and sometimes tragic experiences in these heartfelt novels, which have been celebrated and shared for generations—and this unabridged collection will continue to be shared for years to come.
Louisa May Alcott was born in 1832 in Germantown, Pennsylvania. She is best known for Little Women (1968), which is loosely based on her own life and proved to be one of the most popular children’s books ever written. Three sequels followed: Good Wives (1869), Little Men (1871), and Jo’s Boys (1886). Alcott was the daughter of the famous transcendentalist Bronson Alcott and was friend of Emerson and Thoreau. In addition to writing, she worked as a teacher, governess, and Civil War nurse, as well as being an advocate of abolition, women’s rights, and temperance. She died in 1888 and is buried in Sleepy Hollow cemetery in Concord, Massachusetts.