If You Were a Princess: True Stories of Brave Leaders from around the World (Hardcover) 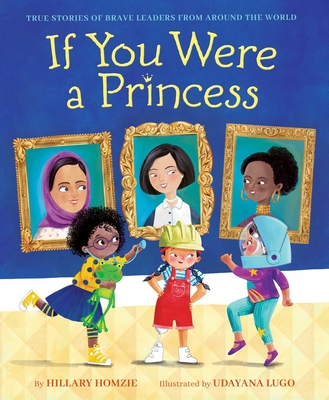 If You Were a Princess: True Stories of Brave Leaders from around the World (Hardcover)


Usually Arrives to Store in 1-5 Days
Not All Princesses Dress in Pink meets Herstory in this inspiring and educational picture book about princesses, past and present, as three girls wonder what it would be like to be princesses themselves.

If you were a princess, what would you be?

Maybe you’d fight for the rights of young girls and women throughout the world. Or graduate from university and find work as a research scientist. Or you might be a musician, a songwriter, a rapper, or a poet.

Three best friends discover this and more as they learn what being a princess truly means. Through the facts and profiles of real-life princesses woven throughout, they become empowered to try and make a difference within their own communities—and discover that anyone can be a princess after all.
Hillary Homzie is the author of the tween novels Queen of Likes, The Hot List, and Things Are Gonna Get Ugly, as well as the comedic chapter book series Alien Clones from Outer Space and picture book If You Were a Princess. During the summers, Hillary teaches in the graduate program in children’s writing at Hollins University. A former sketch comedy performer in New York City, Hillary currently lives with her family in Northern California.

If Udayana Lugo weren’t a children’s book illustrator, she would probably be a baker (although waking up before dawn might be a deal-breaker!). She lives in British Columbia, Canada, with her family.
Three young friends with different skin tones wonder what it would be like to be a princess. Positive attributes are listed and supported through facts and profiles of real-life princesses from the past and present from countries around the world, large and small. The list is extensive and at the end of the book, further biographical information is provided for each of the 28 princesses named in the work. The friends learn that anyone can be a princess in their own way by following the examples of the princesses profiled. The illustrations accurately capture the life and impact of each princess. This is sure to be a hit with princess fans, although emerging readers will find the length and font sizes of the text a challenge. However, the diverse and extensive research is impressive. ­

VERDICT The book is compelling and a revelation: 28 women worth emulating regardless of their station in life, and a book to return to repeatedly to fully appreciate their inspiring stories.
— School Library Journal