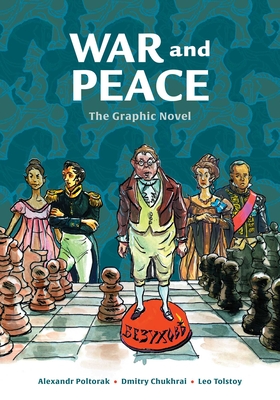 
On Our Shelves Now
Revisit the timeless classic in this graphic retelling of Tolstoy’s celebrated 1869 novel.

With richly detailed settings re-creating the villas and ballrooms of the 19th century, character design based on the real-life inspirations for the figures in the book, and visual depictions of elements from the original text, War and Peace: The Graphic Novel brings Tolstoy's masterpiece to life as never before.

Including forewords from Russian literature experts from the Leo Tolstoy library, this graphic adaptation distills the major plotlines and characters of the sprawling epic for readers to experience this classic novel in a whole new way.
Dmitry Chukhrai is an internationally exhibited artist based in Moscow.

Leo Tolstoy is one of the preeminent novelists and humanist philosophers of the 19th century. His world-famous novels War and Peace and Anna Karenina are widely considered classics and his philosophical works and commitment to pacifism, which led to his excommunication from the Russian Orthodox Church, continue to inspire readers more than a century after his death.