The Captain: A Memoir (Paperback) 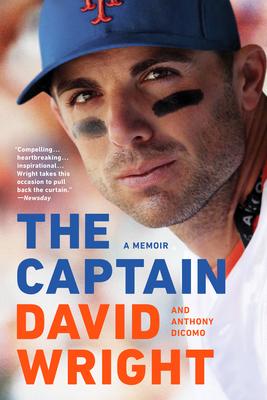 The Captain: A Memoir (Paperback)


On Our Shelves Now
A memoir from one of the most admired players in baseball, the captain of the New York Mets, David Wright

David Wright played his entire Major League Baseball career for one team, the team he dreamed of playing for as a kid: the New York Mets.

A quick fan favorite from Virginia who then earned his stripes in New York, Wright came back time and again from injury and demonstrated the power of hard work, total commitment, and an infinite love of the game.

Wright’s stats are one thing. He was a seven-time All-Star, a two-time Gold Glove Award winner, and a two-time Silver Slugger Award winner. He holds many Mets franchise records and was nicknamed "Captain America" after his performance in the 2013 World Baseball Classic. But there is more: The walk-offs. The Barehand. The Subway Series and World Series home runs. And the electricity that swept through Shea Stadium then Citi Field whenever number 5, “the Captain,” was in the game.
David Wright is a seven-time All-Star third baseman who played fourteen seasons in the major leagues and was voted the “Face of MLB.” He retired as the Mets' fourth captain and the franchise leader in hits, runs, and RBIs. He is a special advisor in the Mets' front office.


Anthony DiComo is the Mets beat writer for MLB.com and a former chairman of the Baseball Writers' Association of America's New York chapter. He also is an analyst for the SNY channel and a regular contributor to MLB Network.
Praise for The Captain:

“Wright takes this occasion to pull back the curtain a little more, and just like during his playing days, he’s someone that people will never get enough of.”—Newsday

“The Captain is a must-read for Mets fans.”—NY Sports Day / Queens Chronicle

“When it comes to the ‘Good Guy Hall of Fame,’ Wright is a shoo-in.”—Bookreporter.com