#Moby-Dick; Or, The Whale: A Literary Classic Told in Tweets for the 21st Century Audience (Twit Lit Classics) (Hardcover) 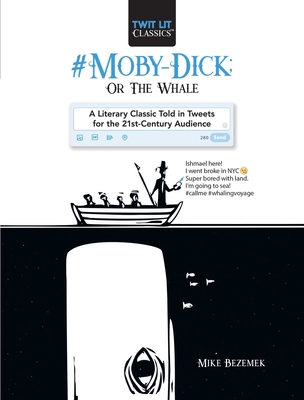 #Moby-Dick; Or, The Whale: A Literary Classic Told in Tweets for the 21st Century Audience (Twit Lit Classics) (Hardcover)


Email or call for price
Moby-Dick is regularly hailed as one of the greatest works of American literature. But suppose Ishmael had instead shared his tale in tweets? #Moby Dick; Or, The Whale hilariously reimagines Herman Melville’s classic whaling novel in just two hundred tweets, each 280 characters or less.
Ishmael here! I went broke in NYC. ?? Super bored with land (damp drizzly soul). I’m going to sea! #callme #whalingvoyage

In this witty abridgment, mad captain Ahab’s quest for vengeance upon a white whale is retold with Internet acronyms. The plight of the Pequod and its motley crew is punctuated by the occasional emoji. And Ishmael ponders whaling and humanity with Twitter hashtags.

Including an appendix that presents the original passages upon which each tweet is derived, #Moby-Dick offers modern readers an entertaining and accessible companion to a great American classic.
Mike Bezemek is a writer, photographer, editor, and teacher. He’s contributed work to a variety of publications, including Canoe & Kayak Magazine, Bull, Hobart, The Morning News, FalconGuides, and elsewhere. He’s not the Mike Bezemek that lives in Texas. He’s the other one.
Bezemek makes Moby-Dick engaging and fun—halfway between the original and Bill and Ted’s Excellent Adventure, with Ishmael LOLing and OMGing all the way. . . . Maybe if I’d been able to experience the classics via hashtags and emoji, I might have read more in high school!” —Ian Doescher, author of the William Shakespeare’s Star Wars series

“Exploits one of the best-kept secrets in American literature: the wild, snarky playfulness of Moby-Dick.” —Tim Cassedy, creator of Dick: A Card Game Based on the Novel by Herman Melville

“Hilarious! Quirky! Imagine Holden Caulfield writing his own CliffsNotes. Modern versions of the original stories told with #attitude.” —Mark Greenside, author of (Not Quite) Mastering the Art of French Living and I’ll Never Be French (no matter what I do)

“‘Like catching the wind or damming a mountain stream with a straw,’ Mike Bezemek’s Twit Lit Classics accomplishes the unaccomplishable—compressing MAJOR works of literature into #tl;dr volumes. The result is swaggering and serious, with a lyrical ellipticism that calls to mind George Saunders’ Lincoln in the Bardo. #praisedue indeed!!!” —JoAnna Novak, author of I Must Have You

“Read these tweets! @mikebezemek will make you laugh so hard you won’t realize how much you’re learning.” —Alison Espach, author of The Adults and Assistant Professor of English at Providence College