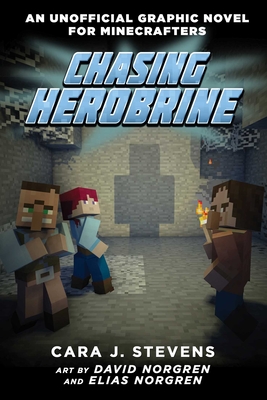 
Usually Arrives to Store in 1-5 Days
For fans of Minecraft and graphic novels, an epic, full-color adventure—Phoenix must save her village from the ghost of Herobrine.

This full-color, graphic novel adventure, with over 750 color images, is created especially for readers who love the fight of good vs. evil, magical academies like Hogwarts in the Harry Potter saga, and games like Minecraft, Terraria, and Pokemon GO.

The redstone dust has barely settled after Phoenix’s epic battle against the Defender when word of a new threat arises: the legendary ghost of Herobrine has been sighted in Phoenix’s village, and under cover of darkness, he’s terrorizing a new family each night.

Phoenix and T.H. rush to the village, where they discover a tangled string of clues. Just as the friends-turned-sleuths are sure they’ve unraveled the mystery of Herobrine’s griefing, they uncover a secret that makes them question everything they’ve learned.

And when a new, stronger enemy appears, their hunt for Herobrine is turned on its end once again. Can a ghost be in danger? And could Herobrine cease to be their enemy and instead become . . . their ally?

Fans of Minecraft won’t want to miss this gripping, mysterious addition to the series that began with Quest for the Golden Apple!
Cara J. Stevens has a deep and abiding love for video games, science fiction and writing. She began her career designing interactive games and stories based on books and is happy to come full circle, creating stories based on video games. She has written nine other books for kids, including the novel Dragon School. When she’s not writing or hanging out at the beach, she can be found playing pinball, WiiU, and classic Atari games. Cara lives in Old Greenwich, Connecticut with her husband, two children, and a loud, fluffy dog named Oliver.
"The highly pixilated art reflects the distinctive animation-style of the game and looks almost like screen grabs, which will only endear it more to young readers who love to play Minecraft. The book reads like the first volume of a continuing adventure and will leave kids wanting more."—Booklist on Quest for the Golden Apple