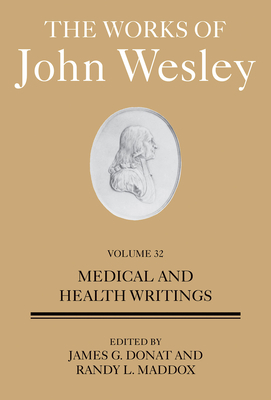 
Usually Arrives to Store in 1-5 Days
From the beginning of his ministry John Wesley was committed to nurturing in his own life and in the communities he served "health of body and of soul." This volume provides a window into his concern for "health of body" by collecting all of his writings related to health and wellness. These range from his best-selling home guide to health care, the Primitive Physic, through his recommendation of electrical-shock therapy, to his concern for nervous disorders. The volume will be of keen interest to all who are committed to recovering Wesley's holistic understanding of salvation and ministry in the present church, as well as to those seeking a better understanding of medical care in the eighteenth century. John Wesley published a collection of advice for preserving health and treating diseases, and his Primitive Physick, went through twenty-three editions in Wesley's lifetime--among the highest number of anything that he published--and stayed in print (and use ) continuously into the 1880s. Those who are aware of this collection, and have glanced at a few of his prescriptions for ailments tend to dismiss it in bemusement. Far from being an amusing avocation, John Wesley's interest in health and healing was a central dimension of his ministry and of the mission of early Methodism. Moreover, when considered in its historical context, Wesley's precedent provides a model of the concern for holistic health and healing that is instructive for his present ecclesial heirs. As a primary record of one of the founders of the Wesleyan/Methodist movement, John Wesley's Medical Writings are crucial to an understanding of the beginnings of that movement, its reflection of the context from which it emerged, and its lasting impact on English and American Methodism and the broader culture. It is likewise absolutely essential for anyone in any of the potential reader groups listed above who wants to understand the context and sensibility around issues of bodily health and Christian salvation out of which Wesleyan theology, worship, spirituality, hymnody, and conferencing emerged. For a church or movement that declares salvation and wholeness as works of divine presence impacting embodied life in the real world, Wesley's reflections on human health are not just relics of a pre-medical age but reveal a deeper sensibility about spiritual health pertinent to the Church's ongoing commitment to flesh and blood human health and flourishing in the real world.