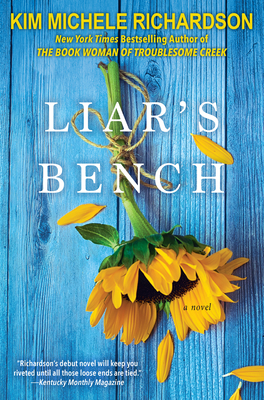 
On Our Shelves Now
From the New York Times and USA Today bestselling author of The Book Woman of Troublesome Creek, Kim Michele Richardson's atmospheric, beautifully written debut transports readers to a time and place where the KKK is still a power, the South is struggling to find itself, women are exploring new freedom, and teenagers are caught between old and new ways of growing up. A story of first love, raw courage, and truths that won't be denied, set against a Southern backdrop passing uneasily from bigotry and brutality to hope in 1970's Kentucky.

In 1972, on Mudas Summers' seventeenth birthday, her beloved Mama, Ella, is found hanging from the rafters of their home. Most people in Peckinpaw, Kentucky, assume that Ella's no-good husband did the deed. Others think Ella grew tired of his abuse and did it herself. Muddy is determined to find out for sure either way, especially once she finds strange papers hidden amongst her mama's possessions.

But Peckinpaw keeps its secrets buried deep. Muddy's almost-more-than-friend, Bobby Marshall, knows that better than most. Though he passes for white, one of his ancestors was Frannie Crow, a slave hanged a century ago on nearby Hark Hill Plantation. Adorning the town square is a seat built from Frannie's gallows. A tribute, a relic—and a caution—it's known as Liar's Bench. Now, the answers Muddy seeks soon lead back to Hark Hill, to hatred and corruption that have echoed through the years—and lies she must be brave enough to confront at last.

Kim Michele Richardson's lush, beautifully written debut is set against a Southern backdrop passing uneasily from bigotry and brutality to hope. With its compelling mystery and complex yet relatable heroine, Liar's Bench is a story of first love, raw courage, and truths that won't be denied.

Kim Michele Richardson is a volunteer for Habitat for Humanity and an advocate for the prevention of child abuse and domestic violence. She is also the author of the memoir The Unbreakable Child and the novels GodPretty in the Tobacco Field and Liar’s Bench. Kim Michele resides in the rolling hills of Kentucky with her family and is hard at work on her next novel.