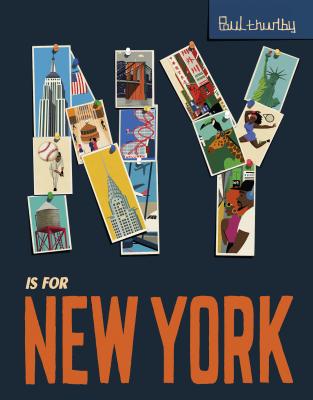 An alphabet book to discover the wonders of New York from with award-winning illustrator Paul Thurlby!

From Times Square to the Statue of Liberty, via Central Park, the Brooklyn Bridge, and more, this stunning book is bursting with the sights, sounds, and energy of The Big Apple! See familiar, iconic landmarks in Manhattan, the Bronx, Queens, Staten Island and Brooklyn; and discover the lesser known charms of the city's five boroughs. The concrete jungle we call New York has never been more spectacular!

P.S. If you look carefully, you'll notice an animal on every spread, exploring the city sights with you!

Paul Thurlby graduated from University of Buckinghamshire and became a full-time illustrator. His graphic style has been seen in numerous journals and publications. Paul Thurlby lives in England. Visit him at paulthurlby.com.

"Noted artist Thurlby applies his creative sense of design to an alphabet of New York City. Readers will be immediately struck by the artist's distinctive style, which uses mixed media and digital techniques to represent the famous sights of the Big Apple… Just right for both first-time visitors as well as fans of the city." — Kirkus Reviews