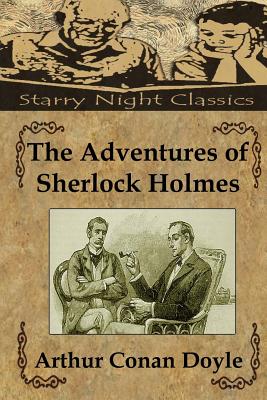 This is book number 3 in the Sherlock Holmes series.

Journey with us to Baker Street, back to the gas-light era, where the world's greatest detective, Sherlock Holmes and his companion Dr. Watson, endeavor to solve twelve of their greatest mysteries, such as "A Scandal in Bohemia." Witness Holmes' amazing deductive powers and be there when he first encounters the mysterious Irene Adler.
Sir Arthur Ignatius Conan Doyle was born on May 22, 1859, in Edinburgh, Scotland. His father left when he was five, but returned three years later, however, the family lived in poverty. Arthur was supported by his wealthy uncles and educated in a Jesuit preparatory school, then Stonyhurst College, then another school in Austria, before studying medicine at the University of Edinburgh through 1881. Beginning in 1879, began writing published stories and article for various magazines and journals. He became a ship's surgeon and traveled to locations such as Greenland and West Africa, completing his doctorate while on board. He eventually set up an unsuccessful medical practice, but ended up writing more stories instead of seeing patients. Doyle's success as a writer, began when his first Sherlock Holmes mystery was published in a magazine in 1886. A second Holmes story was requested by the magazine, with more appearing as time progressed. Arthur was also a soccer player under the name A. C. Smith, golfer and cricket player. In 1885, he married Louisa Hawkins, but she died from tuberculosis in 1906. They had two children. He remarried Jean Elizabeth Leckie in 1907, with whom he had three more children. She died in 1940. In 1890, Doyle studied ophthalmology in Vienna, Austria and opened a practice, but had not a single patient, so he continued writing. Growing increasingly tired of writing Sherlock Holmes, he decided to kill off the character, so he could write historical novels, but there was so much public outcry, that he eventually brought him back. Doyle died on July 7, 1930, from a heart attack in Crowborough, East Sussex, England at the age of 71.