Spirals in Time: The Secret Life and Curious Afterlife of Seashells (Paperback) 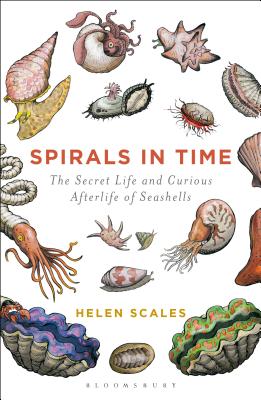 Spirals in Time: The Secret Life and Curious Afterlife of Seashells (Paperback)

A biological and cultural biography of the ubiquitous yet mystical seashell.

Seashells, stretching from the deep past into the present day, are touchstones leading into fascinating realms of the natural world and cutting-edge science. In Spirals in Time: The Secret Life and Curious Afterlife of Seashells, marine biologist Helen Scales shows how seashells have been sculpted by the fundamental rules of mathematics and evolution; how they gave us color, gems, food, and new medicines.

Members of the phylum Mollusca are among the most ancient animals on the planet. Their shells provide homes for other animals, and across the ages, people have used shells not only as trinkets but also as a form of money, and as powerful symbols of sex and death, prestige and war.

The science and natural history of shells are woven into a compelling narrative, revealing their cultural importance and the ways they have been used by humans over the millennia, even as a source of mind-bending drugs. After surviving multiple mass extinctions millions of years ago, mollusks and their shells still face an onslaught of anthropocentric challenges, including climate change and corrosive oceans. But rather than dwelling on all that is lost, Scales emphasizes that seashells offer an accessible way to reconnect people with nature, helping to bridge the gap between ourselves and the living world. Spirals in Time shows why nature matters, and reveals the hidden wonders that you can hold in the palm of your hand.

Helen Scales is a marine biologist based in Cambridge, England. Her doctorate involved searching for giant, endangered fish in Borneo; she's also tagged sharks in California, and once spent a year cataloguing all the marine life she could find surrounding a hundred islands in the Andaman Sea. Helen is now a freelance researcher and broadcaster; she appears regularly on BBC Radio 4, Sky News and the BBC World Service, and has presented documentaries on topics such as whether people will ever live underwater, the science of making and surfing waves and the intricacies of sharks' minds. Spirals in Time is her second book.

“Molluscs may not seem life's most exciting phylum. But Helen Scales, a marine biologist-turned-science writer, makes an impassioned and convincing case otherwise.” —The Economist

“An enchanting, accessible tour of the seashell and its place and purpose within the natural world.” —Kirkus Reviews

“Scales . . . brings a marine biologist's eye and aficionado's heart to these musings on seashells . . . [Her] eclectic approach to this ancient bridge between the human and natural worlds conveys her curiosity and appreciation.”” —Publishers Weekly