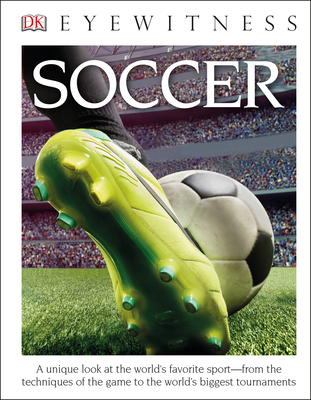 
Usually Arrives to Store in 1-5 Days
The perfect guide for any soccer fan who wants to know everything about the "beautiful game" - from World Cup winners and champions past and present to soccer skills and techniques.

Ever wondered when and where was soccer played for the first time? Do you know the history of the first soccer team? Have you explored the science behind soccer? Enter the fascinating world of the most popular game in the world with Eyewitness Soccer.

Get in-depth knowledge about everything soccer from the rules and laws of the game to various skills and tactics. Follow the evolution of the ball itself, from inflated animal bladders to modern synthetic ones. Know what it feels like to walk in the specialized boots worn by the players - from studless ones from the 19th century to the modern ones with changeable screw-in studs.

Eyewitness Soccer is packed with amazing pictures and facts that would interest new and old fans of the game alike. From bite-sized biographies of legendary players and results from all major tournaments to details about different national teams and clubs, this book packs it all in.
DK was founded in London in 1974 and is now the world's leading illustrated reference publisher and part of Penguin Random House, formed on July 1, 2013. DK publishes highly visual, photographic nonfiction for adults and children. DK produces content for consumers in over 87 countries and in 62 languages, with offices in Delhi, London, Melbourne, Munich, New York, and Toronto. DK's aim is to inform, enrich, and entertain readers of all ages, and everything DK publishes, whether print or digital, embodies the unique DK design approach. DK brings unrivalled clarity to a wide range of topics with a unique combination of words and pictures, put together to spectacular effect. We have a reputation for innovation in design for both print and digital products.   Our adult range spans travel, including the award-winning DK Eyewitness Travel Guides, history, science, nature, sport, gardening, cookery, and parenting. DK’s extensive children’s list showcases a fantastic store of information for children, toddlers, and babies. DK covers everything from animals and the human body, to homework help and craft activities, together with an impressive list of licensing titles, including the bestselling LEGO® books. DK acts as the parent company for Alpha Books, publisher of the Idiot's Guides series and Prima Games, video gaming publishers.