Mrs. Kennedy and Me (Paperback) 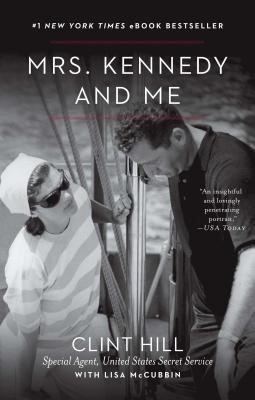 Mrs. Kennedy and Me (Paperback)

In those four years, Hill was by Mrs. Kennedy’s side for some of the happiest moments as well as the darkest. He was there for the birth of John, Jr. on November 25, 1960, as well as for the birth and sudden death of Patrick Bouvier Kennedy on August 8, 1963. Three and a half months later, the unthinkable happened.

Forty-seven years after the assassination of President John F. Kennedy, the one vivid image that never leaves Clint Hill’s mind is that of President Kennedy’s head lying on Mrs. Kennedy’s lap in the back seat of the limousine, his eyes fixed, blood splattered all over the back of the car, Mrs. Kennedy, and Hill as well. Sprawled on the trunk of the car as it sped away from Dealey Plaza, Hill clung to the sides of the car, his feet wedged in so his body was as high as possible.

Clint Hill jumped on the car too late to save the president, but all he knew after that first shot was that if more shots were coming, the bullets had to hit him instead of the First Lady.

Mrs. Kennedy’s strength, class, and dignity over those tragic four days in November 1963 held the country together.

This is the story, told for the first time, of the man who perhaps held her together.
Clint Hill is the New York Times bestselling author of Mrs. Kennedy and Me; Five Days in November; and Five Presidents: My Extraordinary Journey with Eisenhower, Kennedy, Johnson, Nixon, and Ford. A United States Secret Service Agent from 1958 to 1975, Clint Hill was assigned to First Lady Jacqueline Kennedy and was in the motorcade in Dallas on November 22, 1963, when President John F. Kennedy was assassinated. For his courage and swift actions that day, Hill received the nation’s highest civilian award for bravery. Starting out as a Special Agent, Clint Hill served as Agent in Charge of the First Lady Detail, the Vice Presidential Protective Division, the Presidential Protective Division, and when he was retired in 1975, he was Assistant Director responsible for all protective activity. Hill married coauthor Lisa McCubbin in 2021. Find out more at ClintHillSecretService.com.

Lisa McCubbin Hill is an award-winning journalist and New York Times bestselling author. She is the author of the acclaimed biography Betty Ford: First Lady Women’s Advocate, Survivor, Trailblazer and coauthor (with Clint Hill) of the New York Times bestsellers Mrs. Kennedy and Me; Five Days in November; and Five Presidents: My Extraordinary Journey with Eisenhower, Kennedy, Johnson, Nixon, and Ford. She met Clint Hill while writing her first book, The Kennedy Detail: JFK’s Secret Service Agents Break Their Silence (with Gerald Blaine). Previously, Lisa was a television news anchor, reporter, and talk-radio host. After September 11, she was a freelance writer in Saudi Arabia and Qatar. In 2021, Lisa McCubbin married coauthor Clint Hill. Visit her at LisaMcCubbin.com.

"With clear and honest prose free of salaciousness and gossip, Hill (ably assisted by McCubbin) evokes not only a personality both beautiful and brilliant, but also a time when the White House was filled with youth and promise.

Of the many words written about Jacqueline Kennedy, these are among the best." --Kirkus starred review

"[Mrs. Kennedy and Me] conveys a sense of honesty and proves to be an insightful and lovingly penetrating portrait of the Jacqueline Kennedy that Hill came to know." --USA Today (3 1/2 stars)


"Talk about being unable to put a book down; I was enthralled with this memoir from start to finish." --Liz Smith