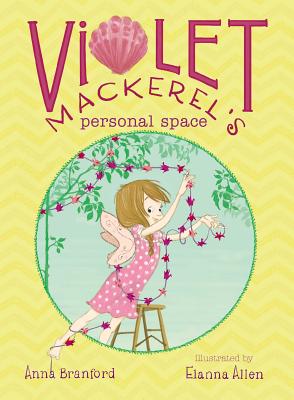 
Usually Arrives to Store in 1-5 Days
Is it possible to leave a piece of you wherever you go? Violet Mackerel thinks so in this fourth illustrated chapter book of a charming series.

Violet’s theory is put to the test when Mama and Vincent announce some very special news: They are going to get married. And they are all going to move. Violet is excited for the wedding, but Dylan is angry about the move. Normally, it is nice to be inside with your family when there is a big noisy storm outside and there is pumpkin soup for dinner and something on TV about penguins. But it is hard to enjoy it when your brother is outside in the garden in a leaky tent.

When Dylan won’t budge, the wedding preparations feel a bit sad. But just in time, Violet thinks of the perfect way to help Dylan feel better about moving. And her Theory of Leaving Small Things Behind is going to come in handy!
Anna Branford was born on the Isle of Man and spent parts of her childhood in Africa and in Papua New Guinea. Now she lives in Melbourne, Australia, with a large black cat called Florence. She writes, drinks cups of tea in her garden, and makes dolls and other small things, which she sells at early morning markets. Anna is the author of the Violet Mackerel series. Visit her at AnnaBranford.com.

Elanna Allen lives in New York with her husband and sons, where she writes and illustrates children’s books and designs characters for television. She wrote and illustrated Itsy Mitsy Runs Away and has created characters for Disney, Nickelodeon, and PBS. Stop by and say hi at ElannaAllen.com.
"The thoughtful protagonist of Violet Mackerel’s Brilliant Plot (2012) first develops her Theory of Leaving Small Things Behind when her family leaves the beach house where they’ve spent a lovely holiday. Then her mother and her boyfriend, Vincent, announce their plans to marry and move to a larger place. Violet’s excited about the wedding but nervous about the move. Her older brother, Dylan, wanting none of it, relocates to a tent in the garden. The third-person, present-tense narrative convincingly sticks to Violet’s point of view as she and her family negotiate this tricky time.... It is no small thing for a 7-year-old to cope with change. Branford offers chapter-book readers an appealing model."
— Kirkus Reviews, June 2013

"Mama and her boyfriend, Vincent, are getting married. Planning for the wedding is fun, but looking for a new house is divisive. Whereas the previous book, Violet Mackerel’s Natural Habitat (2013), explored Violet’s relationship with big sister Nicola, it’s brother Dylan who comes to the forefront this time. His anger about the move is distressing to Violet, but it allows her to try out one of her new theories in an attempt to bring him round. With its gentle wisdom and sincerity, this series has made a space for itself among early chapter books, and hopefully there are more Violet Mackerel books to come."
— Booklist Online, October 2013