Be Our Guest (Revised and Updated Edition): Perfecting the Art of Customer Service (Disney Institute Book, A) (Hardcover) 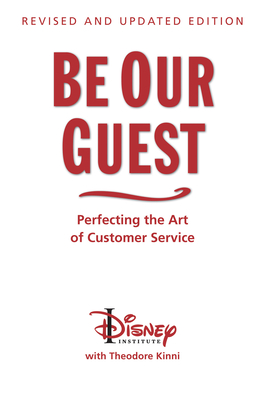 Be Our Guest (Revised and Updated Edition): Perfecting the Art of Customer Service (Disney Institute Book, A) (Hardcover)

By The Disney Institute, Theodore Kinni, Tom Staggs (Foreword by)


Usually Arrives to Store in 1-5 Days
Exceeding expectations rather than simply satisfying them is the cornerstone of the Disney approach to customer service.
Disney Institute specializes in helping professionals see new possibilities through concepts not found in the typical workplace, is revealing even more of the business behind the magic of quality service. During the last twenty-five years, thousands of professionals from more than thirty-five countries and more than forty industries have attended business programs at Disney Institute and learned how to adapt the Disney approach for their own organizations.Be Our Guest highlights the successes many of these companies have achieved, plus the key processes and best practices that have made Disney a trusted and revered brand around the world for more than eighty-five years.
Want more insight on The Walt Disney Company, its founder, and its driving creative forces? Explore these behind-the-scenes stories from Disney Editions:
Ted Kinni has authored thirteen business books. He has ghostwritten seven books for Booz & Company, Prime Resource Group, The Walt Disney Company, LIF Group, and IMPAQ, Inc. He is also an active business journalist, whose articles and book reviews have appeared in a wide variety of periodicals, including cover stories in Harvard Management Update, Across the Board, Training, Selling Power, Quality Digest, and Corporate University Review.