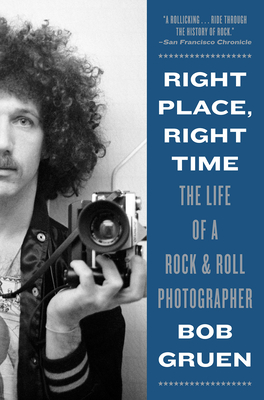 
On Our Shelves Now
An action-packed memoir that takes readers front row, backstage, and on the road with rock and roll's hardest-working photographer

Bob Gruen is one of the most well-known and respected photographers in rock and roll. From John Lennon to Johnny Rotten; Muddy Waters to the Rolling Stones; Elvis to Madonna; Bob Dylan to Bob Marley; Tina Turner to Debbie Harry, he has documented the music scene for more than 50 years in photographs that have captured the world’s attention. Now in paperback, Right Place, Right Time is Gruen’s personal journey from discovering a love of photography in his mother’s darkroom when he was five, through his time in Greenwich Village for 1960s rock and 1970s punk, to being named the world’s premiere rock photographer by the New York Times. With fast-paced stories and iconic images, Gruen gives the reader both a front row seat and a backstage pass to the evolution of American music culture over the last five decades. In the words of Alice Cooper, "Bob had the ultimate backstage pass. Can you imagine the stories he's got?"

Bob Gruen is a world-renowned rock and roll photographer. For almost 50 years, his images have appeared around the world in every form imaginable. He is the author of John Lennon: The New York Years, Rock Seen, New York Dolls, and Green Day: Photographs by Bob Gruen, among others. He lives in New York City.
“There are a number of takeaways for aspiring rock chroniclers. Better yet, there’s a constant sense of awe that he’s walked among gods and goddesses for so long.”
— Kirkus Reviews

"Bob Gruen has been a witness to many of the greatest moments in rock and roll's history."

"Bob is the guy behind the camera who you actually like! He brings out your best cool."

"Bob's got the ultimate backstage pass. Can you imagine the stories he's got?"

"Bob catches those explosive, signature moments that every photographer hopes to get."

"Bob is the most rock-and-roll guy I know. He has seen it all, lived the life, and he doesn't hold back in this book."

“Rock fans will devour this narrative and find its “you are there” style eminently palpable."
— Library Journal