Whores on the Hill: A Novel (Vintage Contemporaries) (Paperback) 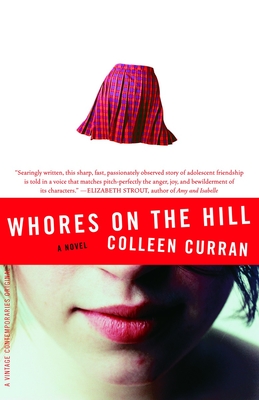 Whores on the Hill: A Novel (Vintage Contemporaries) (Paperback)


On Our Shelves Now
The girls of Sacred Heart Holy Angels eye the good dancers at the all-ages club Metropolis. They waste afternoons at the mall, check out parties on the lake, burn through candid, casual sex.

Everybody calls them the Whores on the Hill, but they don't care.

It is the mid-'80s and they go to the last all-girls' school in Milwaukee, where innocence is scarce and happiness is something to grabbed at in the backseat of a fast car.

Meet exuberant, uninhibited Astrid, her nervy, troubled friend Juli and Thisbe, the shy, ascetic newcomer. They are fifteen years old. And they believe they can take on the world, no matter what it calls them.

But when euphoric promiscuity mixes with a series of dangerous, deadly pranks, their world at Sacred Heart Holy Angels can never be the same.
Colleen Curran grew up in Milwaukee, Wisconsin. Her stories have been published in places like Jane and The Dictionary of Failed Relationships. She now lives in Richmond, Virginia. Whores on the Hill is her first novel.
"[An] arresting first novel. . . . What makes it sing are the lyrical descriptions of the intensity of those first times—including first betrayal by a best friend—and the aftermath of 'remorse . . . grit and shame and a broken, nameless joy.' Quick-moving, cleanly written: a promising start for Curran." --Kirkus

"The 'whores' in this novel are a trio of schoolgirls gone wild. Curran's gripping narrative is so vivid that it'll bring back the anguish of being 16 and angry; you'll feel relieved those days are long-gone." --Glamour

"This is no cautionary tale, but rather a heartbreaking portrait of what life can be like when, as Thisbe says, 'you're fifteen and knobby-kneed and you only had a handful of choices. Your world was small and cruel and narrow-minded and breathtaking." --Teen Vogue