Shinji Takahashi: Into the Heart of the Storm (The Society of Explorers and Adventurers) (Hardcover) 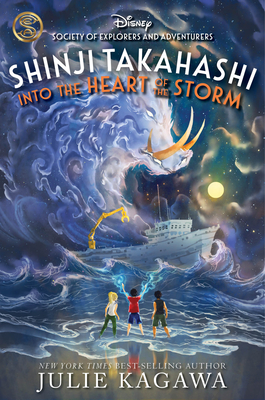 Shinji Takahashi: Into the Heart of the Storm (The Society of Explorers and Adventurers) (Hardcover)


Coming Soon - Available for Pre-Order Now
High-tech wizardry, old world legends and a little bit of Disney magic all shine through in Shinji Takahashi: Into the Heart of the Storm, the second book in the Society of Explorers and Adventurers series from renowned best-selling author, Julie Kagawa.

As Shinji struggles to understand and control his new guardian magic, the members of S.E.A. learn that a sunken ship belonging to the long extinct Natia people has been found on the floor of the Pacific Ocean. Shinji, Lucy and Tinker, along with Oliver Ocean and Phoebe Mystic, a quirky, enthusiastic magic expert who has been called in to help Shinji, head off to check out the wreckage, hoping to get there before the Hightower Corporation can plunder the site, and picking up a young stowaway by the name of Roux along the way.

But nothing goes as planned, and when Shinji accidentally awakens a guardian who's been hidden on a mysterious island and trapped inside a volcano for a century, he causes a volcanic eruption and releases a massive hurricane that threatens the entire coast of California. Now Shinji must learn to control his powers and best his fears so that he can stop the destruction and regain the trust of S.E.A before it's too late.

Julie Kagawa is the New York Times bestselling author of the Iron Fey, Blood of Eden, Talon, and Shadow of the Fox series. At the age of nine she and her family moved to Hawaii, which she soon discovered was inhabited by large carnivorous insects, colonies of house geckos, and frequent hurricanes. She worked as a professional dogtrainer for several years, dodging Chihuahua bites and overly enthusiastic Labradors, until her first book sold and she stopped training to write full time. Julie now lives in North Carolina with her husband, two obnoxious cats, and a pair of Australian Shepherds. You can follow her on Instagram or Twitter @JKagawa or check out her website at juliekagawa.com.