How Do Dinosaurs Go to School? (Board book) 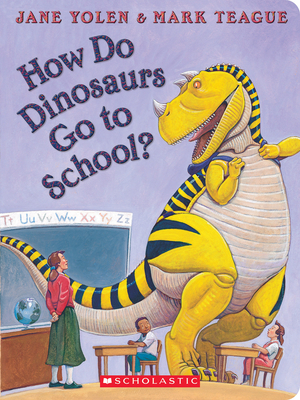 How Do Dinosaurs Go to School? (Board book)


On Our Shelves Now
It's time for school, dinosaurs! A laugh-out-loud prehistoric school adventure from award-winning team Jane Yolen and Mark Teague.

Join everyone's favorite dinosaurs as they ride the bus, read their favorite books, and play with their friends.

Playful text and hilarious pictures capture the high-sprited and playful nature of young children and make this a perfect book to share with any little one heading off to school for the first time. A gentle introduction to classroom behavior and making friends.

Plus, children will find the name of each dinosaurs hidden in the pictures!

Mark Teague is the internationally bestselling illustrator (and author) of more than 50 books for children. His numerous awards and honors include the Book Sense Book of the Year Award and the Christopher Medal. He has illustrated 12 full-size books and 11 board books in the widely successful How Do Dinosaurs...? series. He is the author of the popular Dear Mrs. LaRue, Firehouse!, and Jack and the Beanstalk and the French Fries. He lives in New York State.
Jane Yolen is the beloved author of more than 365 books for children and adults, including award-winning picture books, fiction, nonfiction, and poetry. In addition to two Nebula Awards and a National Book Award nomination, she has received a Golden Kite from SCBWI, three Mythopoeic Fantasy Awards, and the California Young Reader Medal. Yolen's How Do Dinosaurs Say Good Night? was an ALA Notable Book and a Christopher Medal winner. The book has gone on to become a widely popular bestselling series with over 15 million copies in print. She lives in Western Massachusetts.

“A new cast of brightly colored dinosaurs appears in this charming back-to-school story. The text’s easy rhyme and rhythm will be familiar to those who have read other books in this series, and Teague’s charismatic and naughty dinosaurs will continue to delight readers with their antics and exuberance. Stygimoloch using one arm to prop up his raised hand as he blurts out is also likely to draw a smile from veteran teachers. A fun read-aloud for the first day of school.”—School Library Journal

“This eighth entry (counting the two board books) in the Yolen/Teague How Do Dinosaurs series features a cast of 10 brightly colored dinosaurs that manage to dominate the double-page spreads without overwhelming them. Questions arise when the dinos are put in common school-day situations. Would dinosaurs walk to school or carpool? Would they stomp and make a fuss on the bus? Would they roughhouse and punch and disrupt the class by yelling or fidgeting with their tails in the air? Of course not. Before they leap out the door at the end of the school day, readers will realize that these dinosaurs are helpful, tidy, and protective, “growling at the bullies till the bullying ends.” Yolen’s short, rhyming text and Teague’s irresistible, cavorting dinosaurs perfectly convey how dinosaurs could behave in school, large and powerful though they may be.”–Booklist

Jane Yolen and Mark Teague have done another wonderful job at creating a funny book that gets small children to think about their own behavior at school. This is a fun book for the classroom, library story time, and at home.”–Suite101.com