Stand Up!: 10 Mighty Women Who Made a Change (Hardcover) 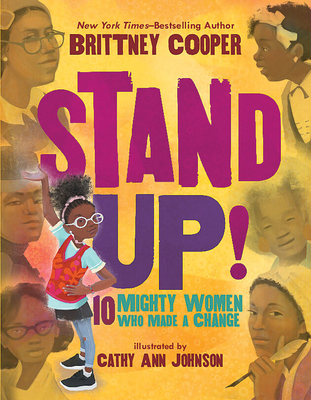 Stand Up!: 10 Mighty Women Who Made a Change (Hardcover)


On Our Shelves Now
From the New York Times bestselling author of Eloquent Rage comes a powerful, groundbreaking picture book debut introducing young readers to ten revolutionary Black women -- both historical and contemporary -- who changed the world for the better, inspiring readers today to know their strength, to be brave, and to STAND UP!

“A breakthrough... this force of nature is becoming one of our fiercest voices in the new generation of African-American thinkers.” -- Essence

Bestselling author Brittney Cooper is a leading Black feminist voice of our times. From her New York Times bestseller Eloquent Rage, selected by Emma Watson as an "Our Shared Shelf Book," to her frequent guest appearances on MSNBC, to her regular features on Cosmopolitan.com and Salon.com, and her TED Talk with over 800K views, there's no question Brittney Cooper is one of the most preeminent Black influencers of today. Now, this author, professor, activist, and cultural critic brings her immense talents to the children's space with a seven-title publishing deal at Scholastic, spanning from picture books to middle grade, and launching with this momentous picture book debut: Stand Up!

Stand Up! tells the story of ten historic female figures who changed the world by standing up for what's right, including legendary Civil Rights activists like Ruby Bridges and Rosa Parks and spanning to contemporary role models like Bree Newsome, who removed the confederate flag from the South Carolina state house grounds, and Mari Copeny, a youth activist who fought for clean water in Flint, Michigan. This inspirational biographical collection will live side by side with bestselling classics like Little Leaders and She Persisted yet offers a wholly original, powerful new voice and approach that make this story so singular, personal, and groundbreaking. Cooper's enlightening text depicts both famous and unsung Black women who took a stand and made the world a better place for future generations. Each heroic figure is interconnected by a united quest for equity, and offers young readers a stirring, inspirational call to action, reminding them that they are mighty too, and can be forces for change when they stand up!

Brittney Cooper is the New York Times bestselling author of Eloquent Rage: A Black Woman Discovers her Superpowers. A professor of Women's and Gender Studies and Africana Studies at Rutgers University, she cofounded the Crunk Feminist Collective, and her cultural commentary has been featured on MSNBC’s All In with Chris Hayes, Melissa Harris-Perry, the New York Times, New York Magazine, Marie Claire, The Cut, the Washington Post, NPR, PBS, Al Jazeera’s Third Rail, Ebony.com, Essence.com, TheRoot.com, and TED.com, and has been named four times to The Root 100.

Praise for Stand Up!

* “Vibrantly illustrated and featuring a variety of justice-seekers, this book belongs in every library and classroom.” -- School Library Journal, starred review

"The engaging text is enhanced by Johnson’s bright, fluid illustrations... A work of advocacy and encouragement for the youngest readers." -- Kirkus Reviews

"Brittney Cooper is a national treasure. Eloquent Rage is as exhilarating as it is vulnerable, a crucial book that tackles friendship and feminism, Hillary Clinton and Sandra Bland, violence and family, sex and faith and race and gender, all with vibrant grace and honesty. Cooper is a generous writer, affording even those she rages against good humored compassion, but never letting any of us fully off the hook. This book is just so good." -- Rebecca Traister, New York Times bestselling author

"[Eloquent Rage] is distinct both for its telling as the author’s own journey and for its -- yes -- eloquent personal voice, which, between her erudition and her command of vernacular, is funny, wrenching, pithy, and pointed." -- Rebecca Solnit, The New Republic

"A dissertation on black women’s pain and possibility; an autobiography of a black woman’s complicated dance with feminism, overcoming otherness as a big black girl in a skinny-white-girl world, her mother’s triumph over violence, and her own journey from disappointment to black joy." -- Joy Reid, Cosmopolitan