Weekends with Max and His Dad (Paperback) 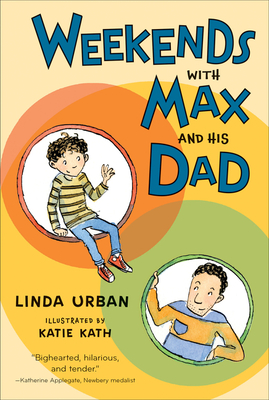 Weekends with Max and His Dad (Paperback)


Usually Arrives to Store in 1-5 Days
From acclaimed author Linda Urban comes a younger middle-grade novel about the weekend adventures of a boy and his dad, who each see "home" in new ways as they adjust to changes in their family.

Max and his dad love their weekends together. Weekends mean pancakes, pizza, spy games, dog walking, school projects, and surprising neighbors! Every weekend presents a small adventure as Max gets to know his dad’s new neighborhood—and learns some new ways of thinking about home.

Acclaimed author Linda Urban deftly portrays a third-grader’s inner world during a time of transition in this sweet and funny illustrated story that bridges the early reader and middle grade novel.
Linda Urban's debut novel, A Crooked Kind of Perfect, was selected for many best books lists and was nominated for twenty state awards. She is also the author of Hound Dog True, The Center of Everything, Milo Speck, Accidental Agent, and the chapter book Weekends with Max and His Dad, which received two starred reviews. A former bookseller, she lives in Vermont. Visit Linda online at lindaurbanbooks.com and on Twitter at @lindaurbanbooks.

Katie Kath is the illustrator of many middle-grade novels and several picture books. She lives in North Carolina. Visit her online at ktkath.com.

Bulletin Blue Ribbon 2016  Raleigh News & Observer Best of 2016  "Fans of Clementine and Ramona have a reason to rejoice: there's a new kid on the block (at least for the weekend). Bighearted, hilarious, and tender, Weekends with Max and His Dad is an absolute charmer." —Katherine Applegate, Newbery medalist  * "Urban’s subtle and perceptive take on divorce will resonate with children facing similar predicaments as she blends Max’s worries and “someone-sitting-on-his-chest” feelings with a vivid imagination and good intentions that take father and son on some very entertaining adventures—with future ones planned."  —Publishers Weekly, starred review   * "Urban excels at credibly presenting this situation from Max’s third-grade point of view... Urban’s writing is both crisply specific (a basset hound “sniffed as she walked through puddles, dragging her ears like flat-bottomed boats”) and simple enough to be accessible."  —Bulletin, starred review   "Urban’s touch is light throughout, and with likable characters... and a story just right for budding chapter-book readers, she’s off to a good start."  —Horn Book   "The cast of characters grows throughout, but at the heart of the story is Max’s warm, easygoing relationship with his father."  —Booklist —