Winter Dance Board Book: A Winter and Holiday Book for Kids (Board book) 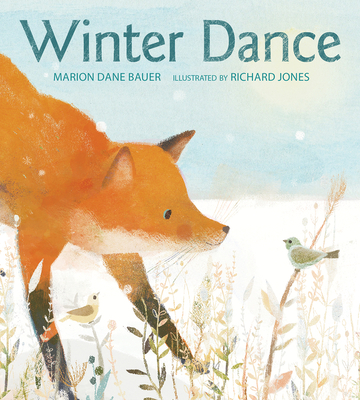 Winter Dance Board Book: A Winter and Holiday Book for Kids (Board book)


Usually Arrives to Store in 1-5 Days
Now in a lush gift board book edition perfect for those snuggly storytimes! As winter approaches, every animal seems to know how to prepare—except the fox! This gorgeous book by celebrated author Marion Dane Bauer and exciting new illustrator Richard Jones reveals that each animal has a unique way of welcoming a new season.

Snow is coming, and it's time to get ready! The squirrel gathers nuts, the geese soar south, and the snowshoe hare puts on its new white coat. But what should the fox do? Each animal advises the fox that its own plan is best, but the fox thinks otherwise—yet it's not until he meets a golden-eyed friend that he finds the perfect way to celebrate the snowfall.

Stunning illustrations by the new talent Richard Jones are the perfect complement to the Newbery Honor winner Marion Dane Bauer's lyrical and playful homage to the natural world.

Marion Dane Bauer has written more than one hundred children's books, including picture books, easy readers, early chapter books, and novels. She won a Newbery Honor for On My Honor, a middle grade coming-of-age story. She lives in Falcon Heights, Minnesota. www.mariondanebauer.com.

Richard Jones has more than fifteen years of experience in the creative arts and worked in a children's library for over a decade. Combining his two passions, he began illustrating children's books in 2016. Winter Dance is his first picture book in the US. He lives in Devon, England. www.paintedmouse.com

? "An exemplary addition to the shelves of nature-themed picture books." —Kirkus, starred review   ? "Bauer’s verselike text pairs gracefully with smudgy and similarly understated scenes from British illustrator Jones: the text and artwork work in tandem to suggest the hushed onset of winter while carrying readers forward with the swiftness of a snow flurry."  –Publishers Weekly, starred review   ? "The regular pattern of Bauer’s text provides excellent support for pre-readers, while remaining sweetly simple. However, it’s Jones’ soft-lined, textured illustrations that steal the show, as they cast beautiful forest scenes across the page, using a cool wintry palette against which the fox’s orangey-red fur pops. Eventually, the fox finds another of his kind, who has the answer to his question, providing a lovely finish to this finely crafted winter’s tale." —Booklist, starred review   "Inspired by the author’s discovery of the foxes’ dance in the woods of the North, the descriptive, lyrical text and its placement imitate the dance’s movement...A suggested first purchase suitable for young readers in libraries and classrooms studying seasons and animal behavior." –School Library Journal —