Bark to the Future: A Chet & Bernie Mystery (Hardcover) 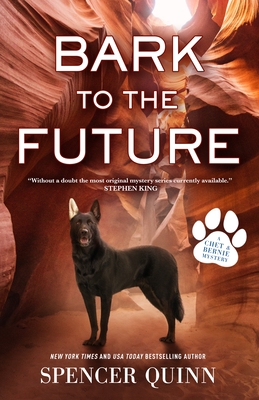 Bark to the Future: A Chet & Bernie Mystery (Hardcover)

This is book number 13 in the A Chet & Bernie Mystery series.

When Chet the dog, “the most lovable narrator in all of crime fiction” (Boston Globe), and his human partner, PI Bernie Little, are approached by a down-and-out older man with a cardboard sign at an exit ramp, Bernie is shocked to discover the man is a former teammate from his high school baseball team. Chet and Bernie take Rocket out for a good meal, and later, Bernie investigates Rocket’s past, trying to figure out what exactly went wrong.

Then, Rocket goes suspiciously missing. With his former teammate likely in danger, Bernie goes back to his old high school for answers, where much that he remembers turns out not to be true—and there are powerful and dangerous people not happy with the questions Bernie is asking.

Bernie soon learns that he misunderstood much about his high school years – and now, Chet and Bernie are plunged into a dangerous case where the past isn’t dead and the future could be fatal.

Spencer Quinn is the pen name for Peter Abrahams, the Edgar-winning, New York Times and USA Today bestselling author of the Chet and Bernie mystery series, as well as the #1 New York Times bestselling Bowser and Birdie series for middle-grade readers. He lives on Cape Cod with his wife Diana and dog Pearl.

"A tidy mystery, a good dollop of action, and a rumination on life after high school—who could ask for more? Chet, with his innate doggie wisdom, is sure to inspire loyal fans and seduce new readers." —Publishers Weekly

"Chet's narration provides humor and insight, and Bernie's search into his own past provides meditations on growing up and growing apart." —Library Journal