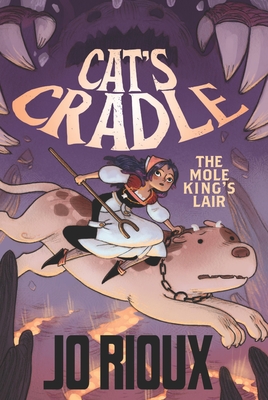 Suri the monster tamer is back for the second volume of this thrilling middle grade fantasy graphic novel trilogy!

Suri has what it takes to be a monster tamer—she just knows it! She’s even tamed her first monster…if you count Byron. He’s less like a monster, more like a giant dog. He needs a master that’s just his size, so Suri, Caglio, and Byron set off for the land of the giants: the Monster’s Cradle.


An epic journey like this requires money and provisions, which they don’t have. But the treasure at the heart of the mole king’s lair might be the solution to their problem!

Jo Rioux is an author and illustrator of children’s books. Since graduating from Sheridan College with a degree in illustration, she has created artwork for young adult books, chapter books, and picture books, but her biggest passion is comic books. She is the illustrator of M. T. Anderson’s graphic novel The Daughters of Ys. Her fantasy trilogy, Cat’s Cradle, debuted in 2022.

Jo lives in the lush suburbs of Ottawa, where she spends her time drawing, reading, teasing her dog, and spinning tales of magic and monsters.