The Genome Odyssey: Medical Mysteries and the Incredible Quest to Solve Them (Hardcover) 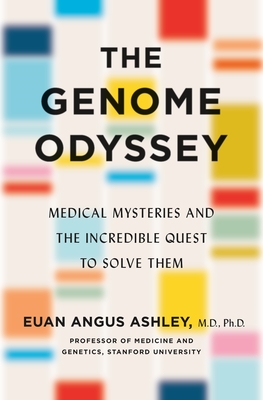 The Genome Odyssey: Medical Mysteries and the Incredible Quest to Solve Them (Hardcover)

In The Genome Odyssey, Dr. Euan Ashley, Stanford professor of medicine and genetics, brings the breakthroughs of precision medicine to vivid life through the real diagnostic journeys of his patients and the tireless efforts of his fellow doctors and scientists as they hunt to prevent, predict, and beat disease.

Since the Human Genome Project was completed in 2003, the price of genome sequencing has dropped at a staggering rate. It’s as if the price of a Ferrari went from $350,000 to a mere forty cents. Through breakthroughs made by Dr. Ashley’s team at Stanford and other dedicated groups around the world, analyzing the human genome has decreased from a heroic multibillion dollar effort to a single clinical test costing less than $1,000.

For the first time we have within our grasp the ability to predict our genetic future, to diagnose and prevent disease before it begins, and to decode what it really means to be human.

In The Genome Odyssey, Dr. Ashley details the medicine behind genome sequencing with clarity and accessibility. More than that, with passion for his subject and compassion for his patients, he introduces readers to the dynamic group of researchers and doctor detectives who hunt for answers, and to the pioneering patients who open up their lives to the medical community during their search for diagnoses and cures.

He describes how he led the team that was the first to analyze and interpret a complete human genome, how they broke genome speed records to diagnose and treat a newborn baby girl whose heart stopped five times on the first day of her life, and how they found a boy with tumors growing inside his heart and traced the cause to a missing piece of his genome.

These patients inspire Dr. Ashley and his team as they work to expand the boundaries of our medical capabilities and to envision a future where genome sequencing is available for all, where medicine can be tailored to treat specific diseases and to decode pathogens like viruses at the genomic level, and where our medical system as we know it has been completely revolutionized.

Euan Ashley is a Professor of Medicine and Genetics at Stanford University. He was born in Scotland and graduated from the University of Glasgow. He attended Oxford University, completing a PhD there before moving to Stanford University where he trained in Cardiology. He joined the Stanford faculty, where he led the team that carried out the first medical interpretation of a human genome and holds the Roger and Joelle Burnell Chair in Genomics and Precision Health. Ashley has received awards from the National Institutes of Health and the American Heart Association. He was recognized by the Obama White House and received the Medal of Honor from the American Heart Association.

His articles have appeared in many journals, including Lancet, the New England Journal of Medicine, the Journal of the American Medical Association, Nature and Cell. He appears regularly on local and national radio and TV. He is the founder of three companies and advisor to several Silicon Valley companies. With three young children, he spends his spare time trying to understand American football, playing the saxophone, and conducting research on the health benefits of single malt Scotch whisky.

“This wonderful page-turner captures the excitement, peril, wonder and anticipation of the so-called “genomics” era — the era that has begun us to allow us to sequence the entirety of DNA carried within our bodies, and to understand the functions of parts of this genome. Dr Ashley, one of the pioneers of gene sequencing technologies, writes with authority, elegance and simplicity to enable an in-depth understanding of the most exciting scientific developments of our times. Every curious reader must read this book.”
—Siddhartha Mukherjee, Pulitzer Prize-winning and #1 New York Times bestselling author of The Emperor of Maladies and The Gene

“The Genome Odyssey is destined to be a landmark narrative in the canon of modern science. Like Ulysses, Ashley has had a front row seat on this journey by virtue of his own scientific work which has been instrumental in bringing us to this place of great precision in diagnosis. Ashley's prose is brilliant and makes for compelling reading."
—Abraham Verghese, New York Times bestselling author of Cutting for Stone, Professor and Senior Associate Chair of Internal Medicine, Stanford University

"Cracking the genome's code to solve medical mysteries requires a special kind of detective work, and The Genome Odyssey walks us through the most nerve-wracking, heart-in-your-throat cases to show us how it's done. With a storyteller's flair and a doctor's devotion, Euan Ashley explains a host of astonishing breakthroughs, each accomplished with human lives on the line. Taken together, his and his colleagues' work will leave you breathless."
—Robert Kolker, #1 New York Times bestselling author of Hidden Valley Road

"Dr. Euan Ashley's book opens a window into the future of medicine and shows us firsthand how genetic information is transforming lives. In The Genome Odyssey, he shares compelling stories of real patients facing rare diseases and the life-changing breakthroughs made possible by decoding their full genetic makeup."
—Anne Wojcicki, Co-founder and CEO of 23andMe

“I have known first-hand the heart ache wrought by rare and undiagnosed disease. I have also seen up close the power of the human genome to provide answers and, in time, treatments to families affected with genetic disease. In this book, one of the world’s foremost experts lays out the astonishing advances in our application of the human genome to medicine. The science is thrilling. The hope and compassion Professor Ashley brings to his patients and to his subject matter are compelling. Political leaders should take note if they want to ensure their countries harness the power of the human genome and stay in the vanguard.”
—The Right Honourable David Cameron, Former Prime Minister, United Kingdom, and Initiator of 100,000 Genomes Project, Genomics England