There's a Skeleton Inside You! (Hardcover) 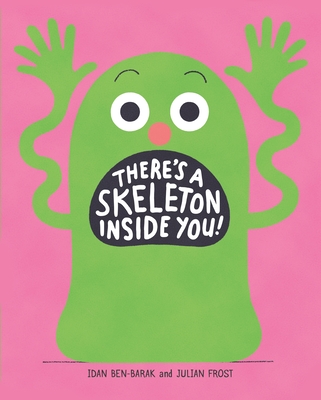 There's a Skeleton Inside You! (Hardcover)

From writer Idan Ben-Barak and illustrator Julian Frost, the creators of Do Not Lick This Book, comes a hilarious, interactive picture book that takes a look inside our bodies to show what humans are made of.

Lay your hand flat out in front of you. Have you ever wondered what it's made of?
What's beneath your skin?
Your muscle?
Your nerves?

Find out in There's a Skeleton Inside You!

Follow two friendly aliens named Quort and Oort as their spaceship breaks down on the way to their friend Kevin's birthday party. They realize they need a hand, but . . . they don't have hands! Don't worry. They have a great idea: They'll just grow some!

What follows is an uproarious exploration of what makes up the human body, layer by layer.

Idan Ben-Barak has written several books so far, including Do Not Lick This Book and Small Wonders: How Microbes Rule Our World; they’ve been translated into over a dozen languages and won a couple of awards. He lives in a smallish apartment in Melbourne, Australia with his wife and their two boys. Sometimes, after they go to bed, he grabs the guitar and makes up harmless little tunes. He has degrees in microbiology and in the history and philosophy of science, a diploma in library studies, and a day job that has very little to do with any of the above. You can find Idan on Facebook (too often for his own good), Instagram (occasionally) and Twitter (rarely). When he has anything to say about writing he says it on his blog.

Julian Frost is an internationally renowned illustrator, designer, director, and animator. He received worldwide acclaim for his animation "Dumb Ways to Die," created for the Metro Trains in Melbourne, Australia to promote rail safety, which won the Cannes Lion Grand Prixs and has had close to 188 million views on YouTube since 2012. Frost also illustrated Ben-Barak's Do Not Lick This Book.

"The Australian creative team who introduced readers to microbes in Do Not Lick This Book (2017) returns with a similarly metafictive introduction to our structural insides. A clever presentation of some basic anatomy by a duo with talented hands indeed." — Kirkus