Ruthless: Scientology, My Son David Miscavige, and Me (Paperback) 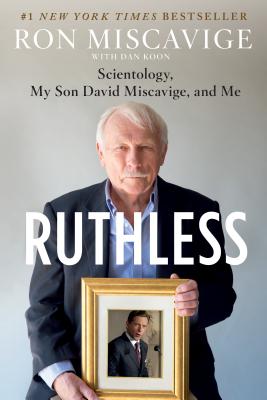 Ruthless: Scientology, My Son David Miscavige, and Me (Paperback)

“A sad and painful but bravely told story.” —Kirkus Reviews

The only book to examine the origins of Scientology's current leader, RUTHLESS tells the revealing story of David Miscavige's childhood and his path to the head seat of the Church of Scientology told through the eyes of his father. Ron Miscavige's personal, heartfelt story is a riveting insider's look at life within the world of Scientology.

Not for sale outside the U.S.

Ron Miscavige is the father of David Miscavige, the leader of the Church of Scientology. He and his family joined Scientology in 1970, and he worked for The Sea Organization for almost 27 of those years before leaving the Church entirely in 2012. He is a Marine veteran and professional musician.

Dan Koon was a longtime Scientologist and an active member of The Sea Organization. He left the Church of Scientology in 2003.

"Compulsively readable...Feels as if it was written more in sorrow than in anger." —LA Weekly

"Books attacking Scientology are nothing new. But Ruthless...hits particularly close to home — the author’s son David Miscavige has led the church since L. Ron Hubbard died in 1986." —The New York Times Book Review, "Inside the List"

"Recounts the Miscavige family’s experience in [Scientology], which in Ron’s view, 'has become a cult, pure and simple.' Since 1986 the church’s leader has been his son, David." —The Boston Globe

“A sad and painful but bravely told story.” —Kirkus Reviews