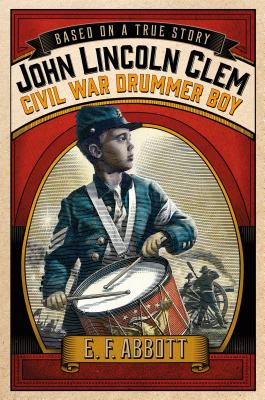 Would you ever run off to join the army, leaving your family behind? That's what nine-year-old John Lincoln Clem does in 1861.

Determined to fight for his country, Johnny sneaks onto a train filled with men from the 3rd Ohio Union Regiment. Taken in by the older soldiers, Johnny becomes a drummer boy, and later, takes up his own musket. As the war rages on, Johnny experiences the brutalities of battle as well as the rampant illness and gnawing hunger in between. But the most dangerous part of Johnny’s journey is yet to come.

Based on a True Story books by E.F. Abbott are exciting historical fiction about real children who lived through extraordinary times in American History. This title has Common Core connections.

E. F. Abbott is a pseudonym for Kristin O'Donnell Tubb, author of Selling Hope and The 13th Sign. She and her family live in Tennessee.

"Johnny’s pluck, erstwhile patriotism, and sheer determination make him a likable and sympathetic hero.... the blend of strong story and illustrations brings to life a unique Civil War tale." —Booklist

"In one of four titles launching the Based on a True Story series, Abbott (a pseudonym for author Kristin O’Donnell Tubb) profiles the youngest known soldier in the American Civil War.... Twenty short chapters, interwoven with archival photos and Noble’s line drawings, depict the grueling realities of a being a Civil War soldier...while dashes of hope...help keep this war story palatable for younger audiences." —Publishers Weekly

Nettie and Nellie Crook: Orphan Train Sisters (Based on a True Story series):

"This engaging narrative portrays children facing real hardships.... An appended note from Abbott (a pseudonym for Susan Hill) provides information about child welfare in the early 1900s, the orphan trains, and the lives of the real Nettie and Nellie Crook." —Booklist

"War becomes a family affair in this women-centered tale.... Readers will admire Sybil for her fortitude and appreciate the insight they gain into her time." —Booklist

"Abbott does a fine job in creating the 18th-century world of the American Revolution. History teachers will delight in the thorough descriptions of rebel espionage strategies and the images of their coded messages." —School Library Journal