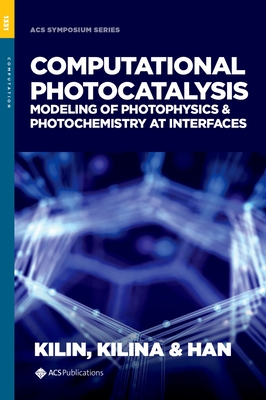 
Usually Arrives to Store in 1-5 Days
Photochemical reactions and the underlying photophysical principles play key roles in the rational design of efficient systems for energy conversion and storage. This volume on interfaces contains fundamental theory, computational models, and applications for real materials. Edited by experts
with a deep knowledge of the community, the volume will be useful to computational chemists, materials scientists, physical chemists, and especially those working in energy and nanomaterials.

Dmitri Kilin is an Assistant Professor of Computational Chemistry at North Dakota State University and holds an adjunct faculty position at University of South Dakota. Kilin has over 15 years of experience in modeling excited state dynamics in photoactive nanomaterials, including interfacial chargetransfer and reaction dynamics, surface reactions at catalytic sites, and interfaces of metal and semiconductor nanomaterials for photovoltaic and photocatalytic solar energy conversion. Kilin has published approximately 100 peer-reviewed manuscripts in the area of excited state dynamics. Recently, he organized and co-organized several symposia at the American Chemical Society national meetings, Telluride Science Research Center, and Pacifichem Congress. Kilin completed his B.S. degree (1994) and M.S. degree (1996) in physics at Belarusian State University, (Minsk, Belarus) and received hisdoctoral degree from Chemnitz University of Technology, (Chemnitz, Germany) in Prof. Michael Schreiber's group in 2000. Svetlana Kilina received her undergraduate education (1994) and M.S. degree in physics (1996) at Belarusian State University (Minsk, Belarus). Her research interests were further shaped during her Ph.D. studies in chemistry at the University of Washington, Seattle (2003-2007). In January 2008, aftershe completed her Ph.D., she was awarded the Director's Postdoctoral Fellowship and worked at Los Alamos National Laboratory under the supervision of Dr. Sergei Tretiak. In August 2010 she was appointed as a faculty member in the Chemistry and Biochemistry Department at North Dakota State University(NDSU) and in 2016 was promoted to associate professor. Kilina is the recipient of an Early Career Research Award from the Department of Energy (2012) and a Sloan Foundations Award (2014). In 2017 she was awarded the James A. Meier Associate Professorship by NDSU College of Mathematics and Science.Her current research is on the frontiers of modern quantum chemistry and nanoscale material science with a particular focus on inorganic?organic interfaces in novel hybrid, functionalized nanomaterials. Yulun Han is currently a postdoctoral researcher at North Dakota State University working with Dmitri Kilin. He received his B.S. in Applied Chemistry from Donghua University in 2009. In 2010 he moved to the United States where he later received his M.S. in Chemistry in 2013 and Ph.D. in MaterialsChemistry in 2015 from the University of South Dakota under the supervision of Prof. Mary T. Berry. His research interests include modeling optical properties of nanomaterials as well as experimental and computational investigation of photochemical reactions.