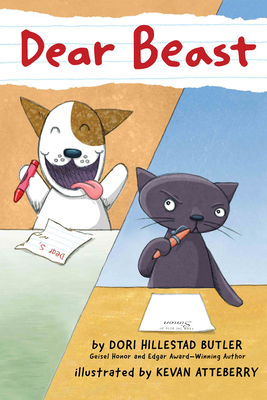 This is book number 1 in the Dear Beast series.

Simon has taken care of his owner, Andy, for many years. He's a good cat. Clean, responsible, and loyal. What more could a boy want? Even when Andy's dad moves out, Simon is certain that Andy doesn't need another pet. So why would Andy's dad adopt a DOG?! To make matters worse, the animal is a rude, rowdy troublemaker.

Simon's job is clear: the beast has got to go. He decides to write him a letter. Strongly worded, of course. But when the dog's response sets off an unexpected correspondence, Simon realizes the beast may be here to stay. Can he make room for another pet in Andy's life?

This funny and heartwarming collaboration between Geisel Honor and Edgar Award-winning author Dori Hillestad Butler and bestselling illustrator Kevan Atteberry is a tribute to the love of a good pet - and the joy found in new friendship. With nine chapters and adorable full-color illustrations on every spread, the series is perfect for kids transitioning from picture books to chapter books.

A Junior Library Guild Selection
Dori Butler is an award-winning author of mysteries and books for all ages, including the King and Kayla series and the Haunted Library series. She is a two-time Geisel Honor recipient, an Edgar Award winner, and has been nominated for children's choice awards in 19 states. Dori lives in Washington with her husband and their very large dog, Mouse. Visit her online at www.kidswriter.com!

Kevan Atteberry is an illustrator who has written and/or illustrated many books for children, including Ghost Cat, which received a starred review in Booklist, and Tickle Monster. One of his biggest claims to fame is that he created Clippy, the animated paperclip helper in Microsoft Office. Kevan lives in the Seattle area. Visit him on the web at www.kevanatteberry.com!
★ "The letter format allows for a variation of fonts and postscript or 'FTS (forgot to say)' commentary, while the text’s humor and colorful cartoon art animate even minor characters. . . . A tale begging for the treat of a sequel."—School Library Journal, Starred Review

"an engaging romp and an introduction to epistolary fiction."—Booklist

"Beneath the humorous cat vs. dog banter, readers learn more about Andy’s life and family through the creatures’ doting observations. Full-color cartoony art on every page provides additional setting and characterization, while a “Doggy Dictionary” in the back addresses Baxter’s many spelling errors."—The Horn Book

"Butler (the King & Kayla series) paces her epistolary story smartly and sweeps it free of distractions . . . It’s a message of acceptance that readers of this generous, easy-to-read story will warm to."—Publishers Weekly

"This inaugural title in a series about a mismatched pair of pets is a terrific introduction to early chapter books, packed with funny correspondence and enormously appealing illustrations."— Shelf Awareness

"Inventively for the early-chapter-book format, the story is told in letters written back and forth . . . Cat lovers will appreciate Simon's prickliness while dog aficionados will likely enjoy Baxter's obtuse enthusiasm, and all readers will learn about the time and patience it takes to overcome conflict and jealousy with someone you dislike."—Kirkus Reviews

"Prepare to be delighted by this story. It is, as a certain Beast would say, 'cool drool.'"—Kara LaReau, Theodor Seuss Geisel Honor author of The Infamous Ratsos series