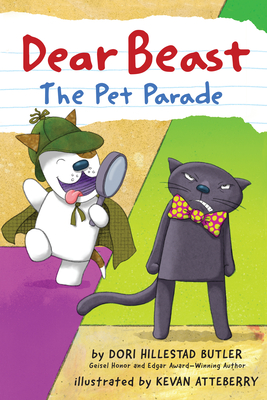 This is book number 2 in the Dear Beast series.

A snobby cat and a good-natured dog fight over the chance to dress up with their owner in this playful illustrated chapter book series told in letters.

It's time for the annual city pet parade! Only one pet can win first place . . . Simon the cat has always hated wearing costumes, so he decides it's okay for Andy's new dog, Baxter, to march with Andy instead. This way, Simon gets to avoid a costume and keep his dignity.

But when Baxter keeps the costume plans a secret, Simon changes his mind. His boy Andy needs him! Who knows what trouble Baxter is up to? That beast can't be trusted--and it's Simon's job to save the day.

This funny and heartwarming collaboration between Geisel Honor and Edgar Award-winning author Dori Hillestad Butler and bestselling illustrator Kevan Atteberry is a tribute to the love of a good pet. With eight chapters and adorable full-color illustrations on every spread, the series is purr-fect for parents to share with their beginning readers.

A Junior Library Guild Gold Standard Selection
Dori Butler is an award-winning author of mysteries and books for all ages, including the King and Kayla series and the Haunted Library series. She is a two-time Geisel Honor recipient, an Edgar Award winner, and has been nominated for children's choice awards in 19 states. Dori lives in Washington with her husband and their very large dog, Mouse. Visit her online at www.kidswriter.com!

Kevan Atteberry is an illustrator who has written and/or illustrated many books for children, including Ghost Cat, which received a starred review in Booklist, and Tickle Monster. One of his biggest claims to fame is that he created Clippy, the animated paperclip helper in Microsoft Office. Kevan lives in the Seattle area. Visit him on the web at www.kevanatteberry.com!