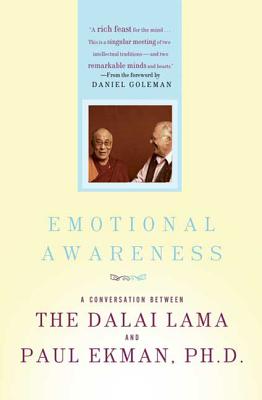 At their first meeting, a remarkable bond was sparked between the Dalai Lama, one of the world's revered spiritual leaders, and the psychologist Paul Ekman, whose groundbreaking work helped to define the science of emotions. Now these two luminaries share their thinking about science and spirituality, the bonds between East and West, and the nature of our emotional lives.

In this unparalleled series of conversations, the Dalai Lama and Ekman push toward answers to the central questions of emotional experience. What are the sources of hate and compassion? What does science reveal about Buddhist meditation, and what can Buddhism gain from the scientific method? Here, they invite us to join them in an unfiltered view of two great traditions and two great minds.

Accompanied by commentaries on emotion research and Buddhist teachings, their interplay—amusing, challenging, eye-opening, and moving—guides us on a transformative journey in the understanding of emotions.

Tenzin Gyatzo, His Holiness the Fourteenth Dalai Lama, is the recipient of the Nobel Peace Prize and is the temporal and spiritual leader of the Tibetan people. The author of The Art of Happiness, among many other books, he is the head of the Tibetan government-in-exile and resides in Dharamsala, India.


Tenzin Gyatso, the Fourteenth Dalai Lama, is the spiritual and temporal leader of the Tibetan people. He was awarded the Nobel Peace Prize in 1989. He lives in exile in Dharamsala, India.

Paul Ekman is the world’s foremost expert on facial expressions and a professor emeritus of psychology at the University of California Medical School in San Francisco. He is the author of fourteen books, including Emotions Revealed and lives in northern California.

“A rich feast for the mind… This is a singular meeting of two intellectual traditions--and two remarkable minds and hearts.” —Daniel Goleman

“A fresh, unique exploration of many subtle issues… on psychology and Buddhism… Full of… unexpected humor and tender surprises… They gently probe each other's system of thought with striking intellectual rigor.” —Shambhala Sun

“Their conversations touch on questions of emotional balance, anger, and the range and limits of compassion, but a brief review can hardly do justice to the range and depth of this fine book.” —Library Journal