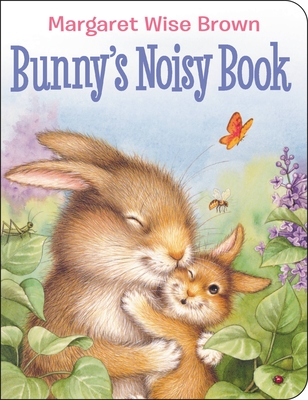 
Usually Arrives to Store in 1-5 Days
An irresistibly sweet springtime board book from the best-selling author of Good Night Moon and The Runaway Bunny.

One sunny morning, in a bright and busy meadow, Little Bunny wakes up. What does he hear? From the fluttering of birds' wings to the buzzing of bumblebees, the sounds of Spring are all around him. Brown's lyrical text and gentle question/answer format offer young children plenty of opportunity to chime right in! The sweet characters are brought to life with adorable paintings by best-selling artist Lisa McCue.
Margaret Wise Brown wrote hundreds of books and stories during her life, but she is best known for Goodnight Moon and Runaway Bunny. Even though she died over 45 years ago, her books still sell very well. Margaret loved animals. Most of her books have animals as characters in the story. She liked to write books that had a rhythm to them. Sometimes she would put a hard word into the story or poem. She thought this made children think harder when they are reading. She wrote all the time. There are many scraps of paper where she quickly wrote down a story idea or a poem. She said she dreamed stories and then had to write them down in the morning before she forgot them. She tried to write the way children wanted to hear a story, which often isn't the same way an adult would tell a story. She also taught illustrators to draw the way a child saw things. One time she gave two puppies to someone who was going to draw a book with that kind of dog. The illustrator painted many pictures one day and then fell asleep. When he woke up, the papers he painted on were bare. The puppies had licked all the paint off the paper. Margaret died after surgery for a bursting appendix while in France. She had many friends who still miss her. They say she was a creative genius who made a room come to life with her excitement. Margaret saw herself as something else - a writer of songs and nonsense.