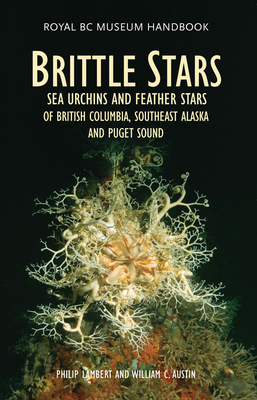 
Email or call for availability
The authors describe 24 species of brittle stars, 8 sea urchins and 2 feather stars inhabiting the coastal waters of BC, the Alaska Panhandle and Puget Sound. All species described live in the shallow waters to a depth of 200 metres; but the authors include species lists of all known species in the region, even those in deeper water. They discuss anatomical features, behaviour, reproduction, feeding, parasites and predators for each group. The species descriptions provide all the details to satisfy the professional biologist, yet the authors' easy-going style makes this book suitable for anyone interested in coastal marine life. Each account contains descriptive and comparative biology, with illustrations and photographs, as well as more details on the life and habits of the animal. A section of colour photographs helps with identification.
Philip Lambert is a curator emeritus in natural history at the Royal BC Museum where he specializes in marine biology. This book is part of a trilogy on the echinoderms of BC's coastal waters, along with Sea Stars of British Columbia, Southeast Alaska and Puget Sound and Sea Cucumbers of British Columbia, Southeast Alaska and Puget Sound.