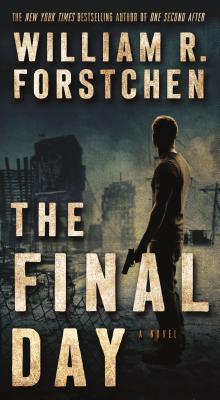 A major release in the New York Times bestselling One Second After series, set in an alternate America rebuilding after an electromagnetic pulse, this is William R. Forstchen's The Final Day.

Since the detonation of nuclear weapons above the United States more than two years ago, the small town of Black Mountain, North Carolina has suffered famine, civil war, and countless deaths. Now, after defeating a new, tyrannical federal government, John Matherson and his community intend to restore their world to what it was before the EMP apocalypse. For the most part, they are succeeding.

This period of relative stability doesn’t last long. A new, aggressive government announces that it’s taking over and ceding large portions of the country to China and Mexico. The Constitution is no longer in effect, and what’s left of the U.S. Army has been deployed to suppress rebellion in the remaining states. John fears he and his town will be targets.

General Bob Scales, John’s old commanding officer and closest friend from prewar days, is sent to bring John into line. Will John and his people accept the new, autocratic regime? Or will revolution rip the fledgling nation apart at the seams?

Months before publication, William R. Forstchen’s novel One Second After was cited on the floor of Congress as a book all Americans should read. This third book in the series immerses readers once more in the story of our nation’s struggle to rebuild itself after an electromagnetic pulse wipes out all electricity and plunges the country into darkness, starvation, and death.

This edition of the book is the deluxe, tall rack mass market paperback.

William R. Forstchen is the author of the New York Times bestseller One Second After and We Look Like Men of War, among numerous other books in diverse subjects ranging from history to science fiction. He has co-authored several books with Newt Gingrich, including Gettysburg: A Novel of the Civil War, Pearl Harbor, Days of Infamy, To Try Men’s Souls and Valley Forge. Forstchen holds a Ph.D. in History from Purdue University, with specializations in military history and the history of technology. He is currently a Faculty Fellow and Professor of History at Montreat College, near Asheville North Carolina. He is a pilot and flies an original WWII recon "warbird." He resides near Asheville with his daughter Meghan.

“A fine postapocalyptic thriller, with richly drawn characters and the kind of story that we can easily imagine happening.” --Booklist, on One Year After

“Forstchen is the prophet of a new Dark Age. The wise will listen.” --Stephen Coonts, New York Times bestselling author, on One Year After

“True storytelling that only the rarest of writers ever master . . . Bill has perfected his talent.” --David Hagberg, New York Times bestselling author, on One Year After

“A riveting cautionary tale.” --Booklist, on One Second After

“An entertaining apocalyptic thriller.” --Publishers Weekly, on One Second After

“The only thing more terrifying than this masterfully crafted story is the possibility of it actually happening--and not a damn thing being done to protect us.” --W.E.B. Griffin & William E. Butterworth IV, New York Times bestselling authors, on One Second After

“Civilization slides into the abyss of a new dark age in this horrifying apocalyptic novel. Forstchen has put Bin Laden's dream on paper and, in the process, taken civilization straight to the rack.” --Stephen Coonts, New York Times bestselling author, on One Second After


“Forstchen did such a damned fine job with One Second After that shortly after the first page, I had been reeled in hook, line, and sinker." --David Hagberg, New York Times bestselling author, on One Second After