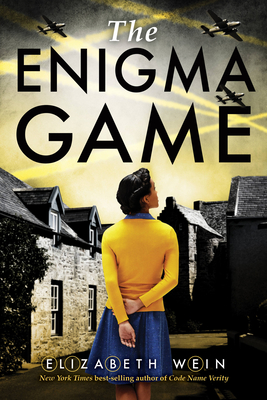 “Elizabeth Wein yet again humanizes history by taking the true story of the Allies capturing the first enigma machine in World War II and using that background to tell the deeply personal stories of three disparate young people who find each other in the midst of war. With characters familiar and new, Wein’s story captures both the danger and turbulence of a world at war, and the moments of happiness that still emerge in spite of that.”
— Mackenzie Van Engelenhoven, The King's English Bookshop, Salt Lake City, UT

#1 New York Times bestselling author Elizabeth Wein delivers an exhilarating, unmissable thriller that finds three very different young adults united to decode a secret that could turn the tide of World War II. Now in paperback.
1940. Facing a seemingly endless war, fifteen-year-old Louisa Adair wants to fight back, make a difference, do something-anything to escape the Blitz and the ghosts of her parents, who were killed by enemy action. But when she accepts a position caring for an elderly German woman in the small village of Windyedge, Scotland, it hardly seems like a meaningful contribution. Still, the war feels closer than ever in Windyedge, where Ellen McEwen, a volunteer driver with the Royal Air Force, and Jamie Beaufort-Stuart, a flight leader for the 648 Squadron, are facing a barrage of unbreakable code and enemy attacks they can't anticipate.
Their paths converge when a German pilot lands in Windyedge under mysterious circumstances and plants a key that leads Louisa to an unparalleled discovery: an Enigma machine that translates German code. Louisa, Ellen, and Jamie must work together to unravel a puzzle that could turn the tide of the war--but doing so will put them directly in the cross-hairs of the enemy.
Featuring beloved characters from Code Name Verity and The Pearl Thief, as well as a remarkable new voice, this brilliant, breathlessly plotted novel by award-winning author Elizabeth Wein is a must-read.
Elizabeth Wein was born in New York City, grew up abroad, and currently lives in Scotland. She is an avid flyer of small planes. She also holds a PhD in Folklore from the University of Pennsylvania. Visit her at www.elizabethwein.com.
* "This is historical fiction at its finest...another soaring success."—Kirkus Reviews, starred review

* "A comprehensive, believable, and engaging page-turner that should not be missed."—School Library Connection, starred review

"Exhilarating and atmospheric.... Just the ticket for lovers of historical thrillers and Wein's many fans."—School Library Journal